Chuck’s challenge of the week: A random picture.

I chose this one: 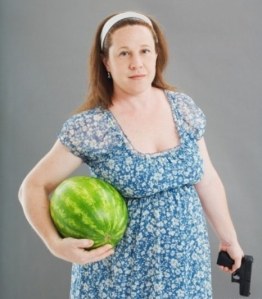 What can I say, it called to me.  Maybe something about smuggling watermelons since my wife is super pregnant.

I also riffed off a challenge from several weeks back: SomethingPunk, for which I wrote the story “Borrowed Time“.  This one’s more fun, less depressing: FruitPunk.

Larry takes a healthy slurp from his biodegradable cup filled with the newest lime-flavored Nutro-Slam beverage, wipes the froth from his mouth with the back of his meaty hand, and then sucks the froth off his knuckle.  It tastes almost, but not entirely, completely unlike lime.  Travelers file past him in a somber parade, waiting for winged tin cans like the ones dinner comes in to whisk them off to some other part of the world.  To stave off the boredom, he begins concocting backstories for them, one by one.  This one, with the patched overcoat and the limp, saved all his creds for one last trip to see his grandchildren before he dies.  That one, in the flowery dress and boyish haircut, back from college to see her parents and come out of the closet.  He wonders if that makes him a bigot.

A shout shatters his reverie: “GRAPES!”

In a twist too graceful for a man his size, Larry spins off his chair and trots across the terminal to where his buddy, Phil, has an unshaven twenty-something pretending not to speak English bent over, arms twisted too high up behind him, face smashed into the countertop.  Funny, he doesn’t look like your average Fruiton.  A pair of grapes roll back and forth in front of him like jumping beans.

They’re genuine.  Deep, lustrous purple, a touch of green by the stem, a bit wrinkled from their journey across the country in the guy’s pocket.  Real grapes.  Larry does a double take and fights the urge to grab them and slam them into his mouth before anybody notices.

The third attempted smuggling this week.  Phil gives the guy another crack on the skull and hauls him off to interrogation while Larry produces a dainty plastic bag and secrets the grapes away.  How he’d love to give one to his daughter… but he knows that he’ll tag them and put them into evidence where they’ll be summarily disposed of.  The incinerator.  Can’t risk the seeds getting into the hands of the public.

“Go about your business,” he mutters to the small crowd who had gathered to see a glimpse of real fruit.  Quickly, fearfully, they do.  Larry looks up, surveys the multitude of eyes watching him —

And that’s when he sees her.  The only one not staring or rushing away.  A plainish, shortish, entirely forgettable woman in a plain, forgettable bluish dress.  Pregnant.  She’s staring at the book in her lap.  Staring hard, like it’s teaching her the meaning of life.  Then she cuts her eyes at him — just a fraction of a second — and then it’s back to the book.

Larry rubs his chin and cranes his neck for a look at her around the dispersing crowd.  Pregnant in the airport?  It was legal again, but you still didn’t see it very often.  Then, as if the meaning of life had filled her to the top, she slapped the book shut, stood, and hurried off in the other direction.

He can’t help following her.  He can’t put his finger on it.  His sister has just given birth, and some subconscious part of his brain notices it, then it swims to the surface.  The walk.  The woman’s legs don’t bow out.  She doesn’t lean back under the weight of a tiny human inside.  She walks ramrod-straight, almost military, like she were wearing a harness, or maybe —

And then the place is a riot of running, screaming, flailing, tripping, stumbling as she whips the dress off, revealing skintight black clothing underneath, a gleaming pistol in her hand, and a harness holding —  he can barely think the word, even though it’s right in front of him, green and swollen and wondrous — a watermelon.  With one hand she unbuckles it, tucking it under one arm like a wide receiver rushing for the end zone, and fires a warning shot into the thirty-foot ceiling.  Everybody hugs the floor.

Larry radios for backup, tripping over the words in his disbelief.

“Armed Fruiton in gate C8.  She’s got a watermelon.  And she’s running.”

“Jesus Christ.  Stay on her, units are en route.”

He tucks his radio away and gives chase, moving too fast for a man of his size.  The extra protein in his rations makes him faster, stronger than he looks, but his highly-polished shoes give him away as they clop-clop on the floor behind her.

Somehow she hears him over the screaming and panicking and clamoring.  She whirls and fires, and a lance of fire blooms in Larry’s arm.  In a heartbeat, he’s down, reaching for his sidearm.  In another heartbeat, she’s standing over him, her pistol enormous in his vision.

“Lose the piece,” she says, and he unhooks his gun and tosses it aside.  “Radio, too.”  He slides it toward her.  She shoots it; it explodes in a tiny firework of sparks.  She bends down close, yanking his ID off of his shirt pin, whispering so that only he can hear.  “Help me escape, and I’ll see that some seeds get to your family.”  And she looks long and hard into his eyes, thumping her fingers on the shiny green rind.  Larry manages the most imperceptible of nods, and she bolts into the shrieking throng.

In moments, navy uniforms flood the terminal.  Nursing his crimson-stained shoulder, Larry flags them down and points them in the wrong direction.  With all the focus on the flood of Fructose Agents, Larry slips a hand into his pocket and produces a grape from within his pocket.  He eyes it like a fresh-on-the-wagon alcoholic eyeing a freshly opened longneck and pops it into his mouth.  Tongues it.  Feels it burst.  Sweetness and coldness and light.  If they find her, they may come back for him.  For now, he’s in heaven.

I am a teacher, runner, father, and husband. I am an author-in-progress. I know just enough about a lot of things to get me into a lot of trouble. END_OF_DOCUMENT_TOKEN_TO_BE_REPLACED
This entry was posted on Friday, May 16th, 2014 at 8:04 PM and tagged with adventure, chuck wendig, Flash Fiction, fruitpunk, funny, Science Fiction, short story, somethingpunk and posted in Flash Fiction. You can follow any responses to this entry through the RSS 2.0 feed.
« Half-Measure
The ToeBags (or, Why Vibram FiveFingers Aren’t Evil) (or, There Is No Miracle Pill) »

15 responses to “Seeds of Insurgence”