When was the last time you saw a film that rearranged your view of reality?

My wife and I saw LaLa Land last night, and as the kids say these days, I am shook. SHOOK.

I can’t do my typical review on this film: the good, the bad, the wtf. I’m reeling from it, like I stepped into the ring with Ali for kicks. I’m seeing stars, occasionally blacking out, chasing the dancing elephants into every corner where they evaporate in ice-cream flavored puffs of smoke.

I loved it. Absolutely loved it. To put it in perspective — this coming from a guy who hates everything — not only am I satisfied in having paid extra to see it in the theater, but I immediately rushed home to buy the soundtrack. Granted, the soundtrack is currently on sale at Google Play for only $8, but still — I gave them my money twice in one day. TWICE.

Okay. Let me focus and try to tell you why you need to pony up and see this movie. 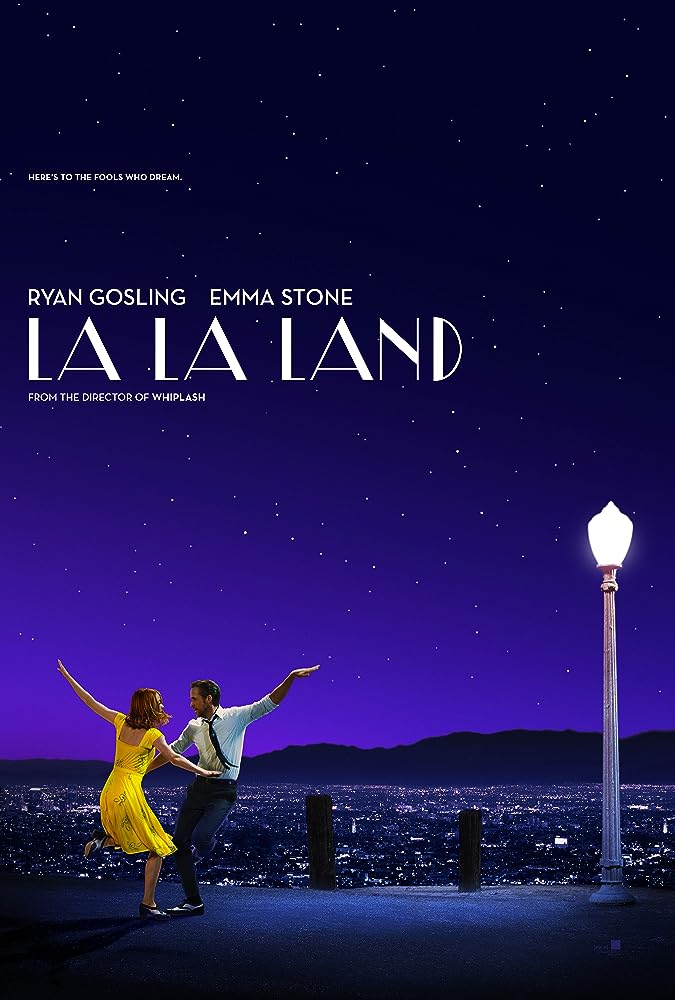 From the striking primary colors of the protagonist and her cohorts at the beginning of the movie to a stunning Fred-Astaire-esque soft-shoe against the backdrop of the cosmos, this is a movie working on your subconscious wonder center with every shot. Not since Jet Li’s Hero have I been so struck by the use of color and composition in a film. It’s stunning. Absolutely stunning.

It’s usually the job of the music in a movie to vanish into the background, to hover in that liminal space where you don’t really notice it but it still works on your subconscious. To surreptitiously set the mood while fading featurelessly into the background. But you can’t do that with a musical; the music has to be front-and-center, the dancing elephant in the three-ring circus.

And here, the music has to pull double — or maybe even triple — duty. One of the two protagonists, as a jazz pianist, lives and breathes and dies with the music. So it’s not only the lifeblood of the form of the film, it’s an integral part of the plot as well. Luckily, the musical score delivers like Domino’s. The leitmotif is in full force and the melodies are magical. It’s catchy and touching and powerful and it makes you want to listen to it again, which leads me inexorably to …

I have a dirty secret to confess. I’m a theatre teacher, and I don’t get particularly sussed over musicals.

I know, I know. I can’t stand Grease, I would be fine without Les Miserables, and I barely bat an eye over Phantom of the Opera. I’m just not moved by the genre.

But this movie moved me. And, as has been well-documented here at this blarg, I hate everything. Yet, somehow, I found myself watching this movie, rapt, oftentimes with tears threatening to fall, as the two protagonists swirled around each other like binary stars in orbit.
I’ll concede here that I’ve been known to bust a tear at kids’ movies. Something about having kids myself makes me susceptible to leaking from my eyeholes when the emotional stuff starts. Mufasa falls into the ravine and Simba nuzzles at his lifeless corpse? Grab the tissues. Bing-Bong leaps from the wagon so that Joy can escape the ravine of oblivion? Definitely something in my eye.
But despite the decidedly lower stakes in La La Land — no dead parents, no shattered innocence, no longing for the simpler days of childhood — I found myself looking skyward and thinking of kittens, lest my wife glance over and catch me wiping at my face. The film is touching and heartfelt and, despite its whimsy, genuine.
The Verdict.
I could go on about how awesome the movie is. The freaking adorable tap dance number. The shameless homage to 80’s new wave music (complete with keytar). The (yes, I’ll mention it again) suspended-in-air dance among the stars as the couple falls head-over-heels in love with each other, and I fell right along with them.
All of that is secondary, really. What shocked me about the movie was this: I can’t recall the last time a movie jolted me so hard, so completely out of reality, as this movie did. For all of its two hours, I was literally transported. Pulled forcibly from the humdrum of the world I know and flung into the whimsical rollick that is La La Land. It’s just what the doctor ordered for a country desperately in need of a distraction; no surprise it’s up for so many awards.
This movie cracked through my carbon-reinforced, unemotional shell and inspired me. And if you can get past the super-campy opening number, it’ll inspire you, too.
Rating:
Four out of four lovingly polished Miles Davis EPs.
(If you’ve seen it, by all means, let me know what you thought. I’m still trying to rearrange my worldview around this movie.)

I am a teacher, runner, father, and husband. I am an author-in-progress. I know just enough about a lot of things to get me into a lot of trouble. END_OF_DOCUMENT_TOKEN_TO_BE_REPLACED
This entry was posted on Monday, February 20th, 2017 at 9:21 AM and tagged with emma stone, great movies 2016, I am shook, inspiration, la la land, la la land review, motivation, movie reviews, ryan gosling and posted in Terrible Reviews. You can follow any responses to this entry through the RSS 2.0 feed.
« Cleansing the Stream
No? »