Still, you can’t swing a pixelated cat this season without running into something like this:

Which, holy crap, is awesome. But frightening. But mostly hilarious and awesome.

The opening salvos in the perennial “war on Christmas” sounded a few weeks ago, when Starbucks had the gall to roll out a “holiday” cup design that had a little less vaguely Christmas-themed adornment than in years past. The valiant defenders of Christendom and Christmas quickly recognized the slight and wasted no time returning fire upon the hapless soldiers on the front line: the poor and uninterested baristas who put the cups into their hands. Which is a little like if I, upset over all the prematurely wilted spinach I’ve gotten lately from my Kroger, go in and dump a bin full of rotten greens on a bagboy. In classic smug (and most importantly, easily bandwagon-able) fashion, throngs of Christmas crusaders took back the coffee bar by claiming their names were “Merry Christmas”, thus forcing the disinterested twenty-somethings to make the totally-not-Christmasy-at-all red cups absolutely Christmasy. 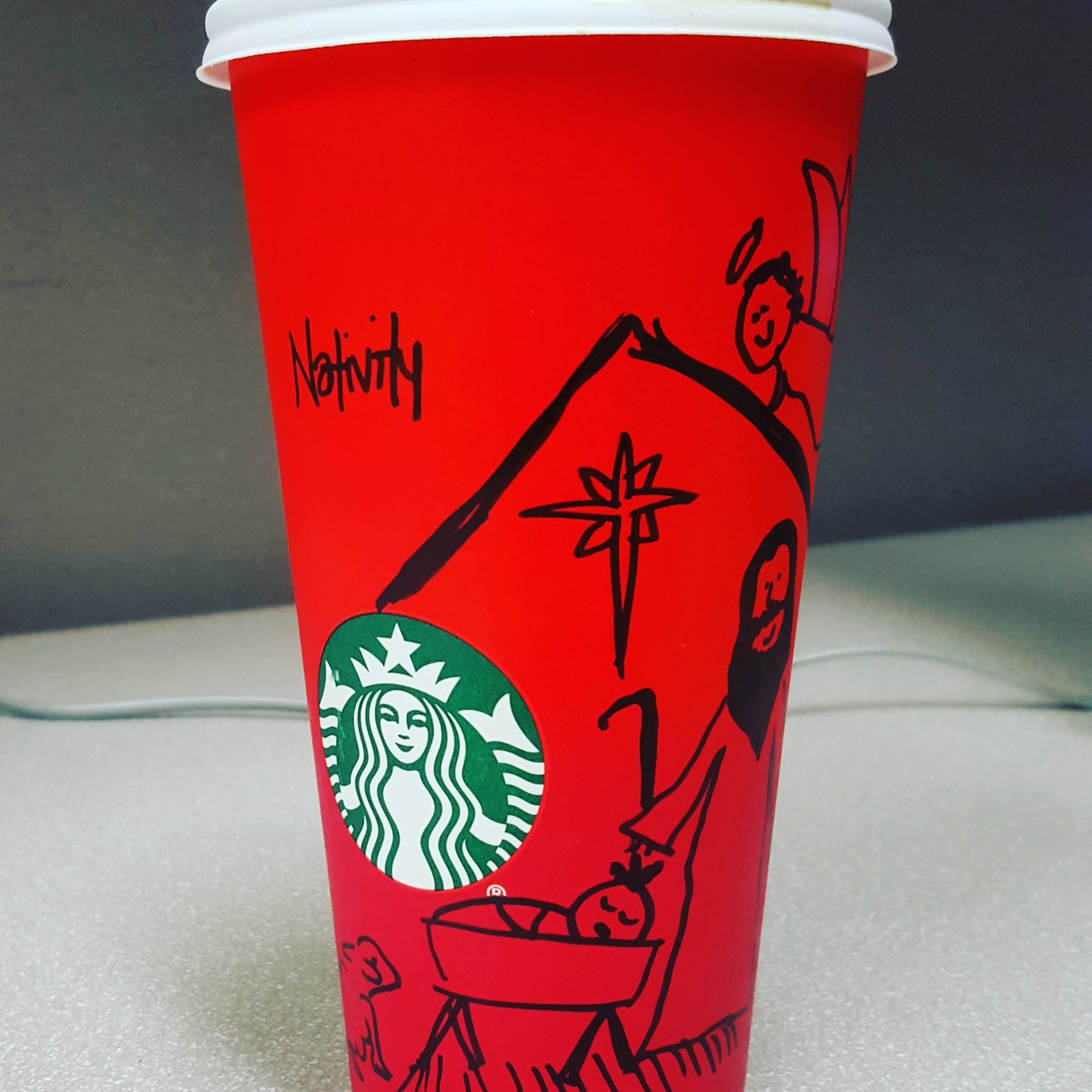 But we know what’s coming.

Because Thanksgiving is almost here. And Thanksgiving, for all that most of us look forward to guzzling gravy straight from the boat and possibly embedding our heads inside the cooked turkey’s flavor-cavity (what, am I the only one that starts Thanksgiving dinner that way?), is nothing these days but the red carpet leading up to Christmas’s door. The decorations are going up. The soundtrack at the mall is changing from inane pop music that nobody listens to to the heartwarming Christmas songs none of us listen to. (The previous sentence is correct.) (And seriously, give me Elvis Presley and Burl Ives and keep the rest of the holiday tunes.)

Fox News will cry persecution first. Actually, they probably already have. Then, under pressure from … people, apparently, or maybe just because they see Fox doing it so they feel they should jump in, CNN will “investigate”. Then it’s only a matter of time before the local reporters in your city are standing in front of a nativity scene in your neighborhood, as stony-faced as if they were standing witness at a murder scene, to tell you about the protests outside such and such government building and the pushback from whatever organized blah-blahs. (I seriously got weary in the middle of typing that sentence and just gave up.)

Let’s be honest. Christmas is not under attack. And even if it were, the “attack” means about as much as an army of clowns attacking Fort Knox with toothpicks. Christmas is woven into the thread of our collective national consciousness. Atheists and Jews celebrate Christmas: it’s a good way to feel involved, and it’s too exhausting not to. Christmas is going nowhere. It’s too much a part of who we are.

But neither are the eternally put-upon going anywhere, which means that every year we will have to put up with the rhetoric (and let’s be honest, the whining) of those who feel that the rest of the world is at war with Christmas. And, internet society being what it is, mockers of those who complain about the world being at war with them live for this season too. The War on the War on Christmas is as predictable as December 25th itself.

It’s endlessly amusing to me that in this season which is supposed to be about lifting each other up and expressing warm feelings and charity and giving and vaguely-defined general good will that throngs of idiots will take to the internet and the street and whatever soapbox is to hand to get good and wound up about this invented conflict.

Which is why, this season, we need to declare war on the War on the War on Christmas. All of these people need to go. People are allowed to say “Merry Christmas”. People are allowed to not say it. Government buildings should maybe not decorate themselves in explicit Christian iconography because, you know, that irritating little Constitutional bit about the separation of church and state. But that doesn’t stop you from decorating your house, or from going out and seeing other houses decorated, or from going to the mall and wading around in the Santa Claus orgy that’s been going on there for weeks. Fargoing live and let live.

But of course, that also means that we need to stop giving attention to the squawkers who ridicule the idiots getting upset about this stuff in the first place. Live and let live. Just like anything else on TV and in the news: if you don’t watch it and don’t care about it, pretty soon, they’ll stop running it.

Just make sure you spend lots of money.

That’s the real reason for the season.

That, and Rambo Jesus. Sorry. I just had to post it again.