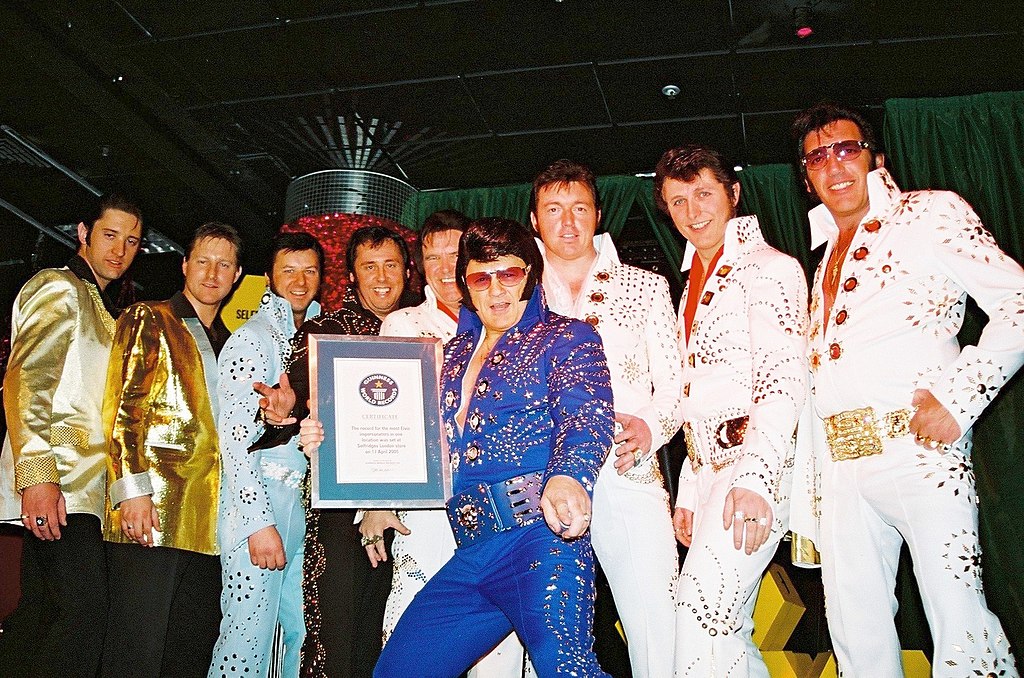 The radio chirped out an all-call, and Officer Barkley shifted his grease-paper wrapped double cheeseburger from one hand to the other to scoop up the comm.

Robbery. Bank robbery, most likely; there were about a dozen banks and ATMs in the strip-mall on that block. It had been a while since Barkley had gotten involved in more than a traffic stop; a byproduct of his recent return to field work after his injury apprehending a murder suspect five months ago. He cut his eyes at his partner, a new recruit by the name of Presley, who nodded curtly and switched on the sirens.

“Car 57 responding. Details on the suspect?”

There was a hesitation on the other end of the line. “It’s, uh… it’s Elvis.”

Sandra hit the street and immediately broke out in a sweat, and only partially because of the two hundred thousand dollars she’d managed to shove in her gunny sack. It was a hundred and six degrees out, and the bejeweled jumpsuit and pompadour wig she sported were not what you could call forgiving in the heat. She snapped her sunglasses down and cast about in something closing in on panic. The shrill trilling alarm from the bank was a dead giveaway; pedestrians were parting around her like a boulder in a stream.

The streets should have been flooded by now; maybe one of the performances had run long. A siren rose in the distance; she only had a few minutes. She’d shoved the pistol into the waistband of her rhinestoned white pants, but there was nothing for it; she grabbed it and dashed up the sidewalk, ignoring the panicked cries of the passersby.

“There he is,” Presley said, jabbing a finger at the windshield.

Barkley followed her finger; sure enough, there went the King, white jumpsuit and all, running against the flow of traffic and scattering people in his wake. Hard to tell at this distance, but he could have been carrying a gun. Barkley gunned the engine and the car lurched onto the curb, scattering overweight gamblers in Hawaiian shirts.

Presley jumped out of the car and ran after the King, shouting for him to stop. But it was no good; the confused pedestrians parted in front of the suspect and then swarmed behind him with cell phones trying to catch a picture, getting in Presley’s way. Barkley dropped the cruiser back in gear and took off.

The cool air of the hotel lobby hit her like an Arctic blast, icing a bead of sweat oozing out under her wig. In front of her, a sign: Jailhouse Convention, ballroom C. Sandra threw a glance over her shoulder; the copy was closing, about fifty yards behind. To punctuate the situation, the door crashed open, and a shrill “STOP! Police!” rang out through the lobby. But there were too many people around for the cop to get a shot. Sandra kept running.

She flew down the disjointedly patterned carpet with her gun in one hand and her sackful of cash in the other, bills fluttering to the floor in her wake like startled butterflies, scattering hotel guests like spilled jellybeans to the left and the right. Here and there, pompadours and oversized sunglasses and bellbottomed jumpsuits turned to watch the commotion. At the end of the hall, a brass sign for ballroom C floated above a set of double doors. She kicked them open and charged into the throng of startled Elvis impersonators.

The gyrating speaker on the stage dropped the mic and pandemonium broke out. Sequins scattered. A few hundred hunks of burnin’ love ran in all directions. Sandra yanked her wig off, shed her jumpsuit, and stole through a side exit.

To the tune of dozens of fire alarms, a flood of Elvises erupted from the rear exit of the building. They broke around the squad car and officer Barkley, who waited patiently with his weapon drawn on the door. Finally, under the cover of three particularly rotund impersonators, she slipped out, cutting immediately down the side street.

She froze. Didn’t turn, just sighed and ran a hand through her hair, matted and lank with sweat from its stint under a wig cap. “Hank.”

“Didn’t think you’d actually do it.”

She turned toward him then, caught him with her eyes. She was still beautiful, dammit. Moreso than she’d been when they were together, if that were possible.

“Your partner’s not so bright,” she said. “Looking for me in the midst of all that.” She flicked her head carelessly back toward the throng. You never saw so many blue suede shoes.

She laughed. “Guess it’s just you and me, then. So what’s it gonna be?” A wicked grin twisted her lip. “Are you lonesome tonight?”

Barkley swallowed hard. It had been a crap year on the force. He’d probably never make captain now, not with a bullet in his leg and a limp to match. Judging from the size of the bag she was carrying, she had at least a hundred thousand dollars, maybe more. His hound dog eyes rolled wearily across her, remembering the years together, the heartbreak, the bridges, the troubled waters.

The wind went out of him, and he lowered his gun. With a knowing look, she tossed him her wig and jumpsuit. It was big on her, but on Barkley, it would fit just about right. Unless… “Have you put on weight since I saw you last?”

He scowled. “I’m flushing my career, I’d like a little less conversation out of you.”

At that, she cackled. “Come on honey. Don’t be cruel.” And she grabbed his hand and guided him out of the alleyway.

Chuck’s challenge this week is the perennial random song title challenge: my song was “Elvis is Everywhere” by Mojo Nixon. I’d apologize for all the song title puns in the story, but I’m actually not at all sorry.

Photo courtesy of Wikimedia Commons: Photo taken by Paul Smith for http://www.apepta.co.uk and kindly supplied by Martin Fox at http://www.elvis2k.co.uk

5 thoughts on “Elvis is Everywhere”