I dunno if you know this or not.

I love science fiction, astronomy, physics… I can’t get enough. I subscribe to Crash Course Astronomy on youtube. I am counting the days to the new Star Wars movie. So I guess it was inevitable that I would love a show like Mythbusters, which takes a scientific look at everyday turns of phrase and bits of movie magic to see if there’s any actual truth to them.

After filming their final season, the show’s hosts have been on a tour lately, doing speaking engagements and sharing some of their favorite moments about the show around the country.

Last night, they were in Atlanta.

And because my wife is awesome, she got me tickets to the show for my birthday back in July.

Now, I’ll be the first to admit that the show is a little nichey; that while it has its fans, it’s probably not widespread enough in popularity for most people to even be familiar with it outside of maybe seeing a rerun of it on the weekend. Still, they basically sold out the Fox theatre in downtown Atlanta. Further, the audience was wonderfully diverse: people of all ages and all ethnicities filled the rows, but maybe more impressive were the families, especially those with kids as young as six or seven. And I will happily admit that I spent the bulk of the show with a big dumb fangirly grin plastered to my face.

Still, I didn’t know exactly what the show was all about. I thought they’d show some clips from the TV show, answer a few questions, maybe do a few live demonstrations. But it was a lot more than that.

The show was full of lovely little moments. My heart warmed when they called their first volunteer up onto the stage — an eleven year old girl — who proudly proclaimed that math was her favorite subject in school. Adam talked about some experiments they had run but never been able to use on the show, like a ridiculously explosive, easily accessible chemical that they are forbidden to disclose, and a lab rat that turned cannibal during a food experiment. The usually stoic Jaime got emotional when asked about his most frightening moment on the show. 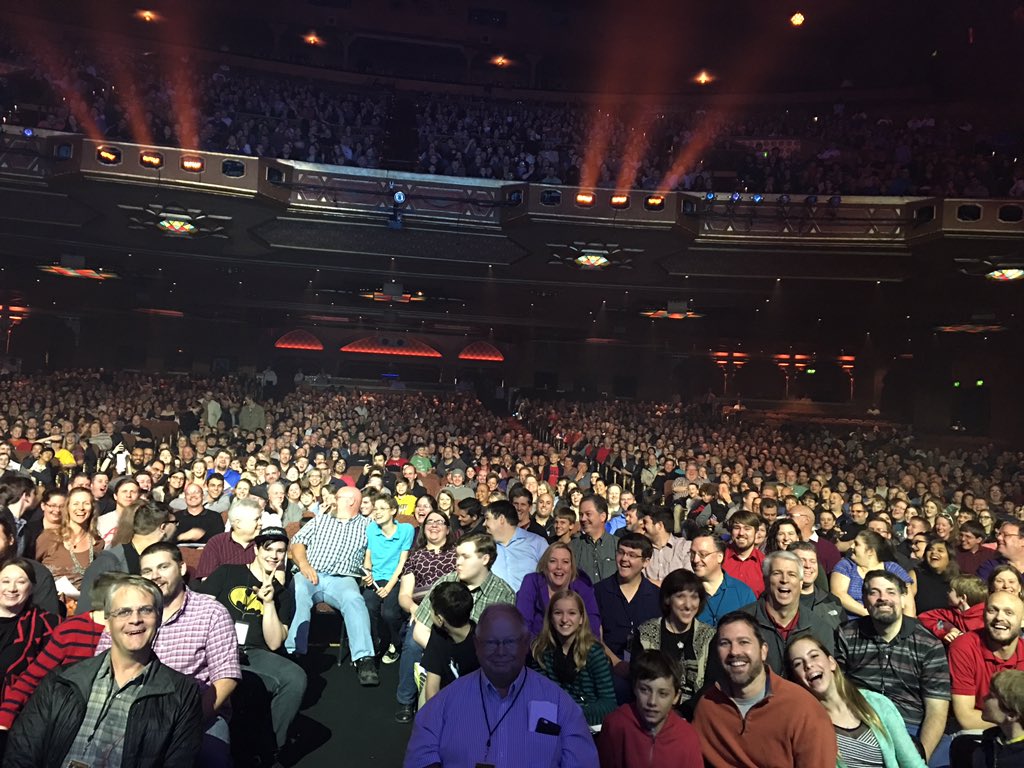 (My brother and I are about thirty rows back on the left.) You can tell based on my formless face-shaped dome head.)

But what I really want to talk about is Adam Savage.

Adam Savage is one of the nerdiest nerds around, putting a gusto and chutzpah into his geekiness that’s really enviable for a more low-key geek such as myself. While I expected to see a few neato science experiments and hear a few funny stories about being on the set (and there was certainly plenty of that), what really resonated with me was the opening moments of the night, wherein Adam told some stories about growing up geeky and what led him to the sort of thinking and experimentation and self-instruction that would eventually lead to a career doing special effects for movies and television and web series about science.

Being the big nerd that I am, I whipped out my pencil and notepad and began scribbling.

Out of the evening, I came away with a list of reading material that I need to look into (100 Years of Solitude, and the works of Raymond Chandler) and some lovely poignant aphorisms about science in particular and learning and being human in general. They were even, believe it or not, applicable to writing. So I thought I’d share a few of them here.

I’ve gone on enough, but suffice it to say that while I went to the show expecting a bit of fun, I came home with a whole new respect for a show I once thought of merely as a diversion.