I’ve struggled with motivation mightily in the months since I started working on my novel.

Some days I feel buoyed by powerful waves of motivation, a deep, slow-burning desire to write and create and push this thing forward.  On those days, it’s all I can do to get myself in front of the computer before the ideas and the words start clawing their way out of my skull.  The plotlines and characters and conflicts dance around in my headspace subconsciously all day, sometimes resolving themselves in time to be written down in neat orderly arrays, other times becoming tangled and spilling out onto the page like intestines from a vicious gut wound.  Motivation isn’t a question on those days.  I’m going to write, regardless of what else I may have going on.

Other days I’m Sisyphus, and my novel is a big boulder the size of six or seven giant men and the hill I have to push it up is high indeed.  Even thinking about the task makes me feel weary and exhausted, and my mind starts thinking of all the other things in my life that need doing in this moment, and wouldn’t it be easier to focus on those things and then, maybe after I’ve done those things, I’ll feel like writing and I can get some work done.  Except, as anybody who’s ever put something off knows, you arrive at the end of the day and you still don’t feel like working on the novel, and what’s more you don’t have time to work properly on it anyway, and also you feel crappy about the fact that you haven’t gotten anything done with it today.  The simple act of even reading your own work to see where you’ve just come from and where you might go next seems like a slog through an endless swamp.  These days it feels impossible to write. 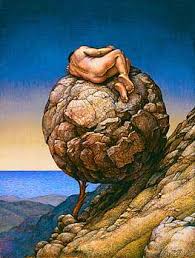 But the writing doesn’t change.  The book is just a book, just a story waiting to be told.  The characters, lively as they may be, are but lumps of clay looking for hands to shape them.  It’s only my perception of the work that seems to affect my motivation to work on it.  So how do you cultivate motivation?  Here are some humble ideas.

And I realize as I edit this post that while this dubious advice seems to fit for writing, I think it applies for staying motivated at just about anything, and if that’s the case, so be it.

To put all this in perspective, here’s a turn that’s happened in the last few weeks.  A few weeks back, I lost the notebook I’ve been using to keep notes for my edit.  I keep notes in the draft as well, but big stuff that needs fixing in the work as a whole went into the notebook.  And it was just gone.  It’s still gone.  And with it went much of my motivation.  I’d lost a significant portion of work, lost a ton of time, and felt overwhelmed at the prospect of going back and doing much of the same work again.  And my work over the past few weeks has suffered.  I’ve been dragging my feet, doing the work at the last minute, doing the bare minimum, even skipping days.  I was dreading the writing.

Well, yesterday I accepted the fact that the notebook was gone and started a new one.  And yeah, it sucks looking at those blank pages that I have to refill.  And it’s painful writing down notes that I’ve already written and retreading ground that I’ve covered before.  But somehow, just accepting the loss and refocusing my effort has given me the best couple of days of editing that I’ve had in a month.  I’m not saying I’ve done the best work, I’m saying I feel better about the work.  Perception is everything.  I refocused from the lost notebook to getting the book done, I made a new plan around my new notebook, I got serious again about making my own time to work, and I accepted the lost work and moved on.  Suddenly, working on the book is that thing I can’t wait to do again.

Tomorrow, the pendulum may swing back the other way, but I’ll keep working anyway.  Motivation isn’t some magic elixir you can drink and suddenly be filled with purpose.  It’s just another thing to be worked at.

9 thoughts on “Staying Motivated (or, how to keep writing on those days when the writing sucks)”