A disclaimer: Glen over at the Scenic Writer’s Shack wrote this up for AI a solid month ago, and due to some truly epic foolery and lameness on my part, well, it sat in the posting queue for all the intervening time. So while it’s a little bit late for a year-in-review post and we should be on to the bigger, better things 2019 is sure to bring, the fault here is entirely mine. Nevertheless, it wouldn’t do to have a voice singing my praises go unheard, so — here’s Glen!

It’s time again to unfurl the star-spangled fan-flag and heap praise where it’s due.

I’ve always believed every five-star, Michelin rated blogger deserves their own personal cheerleader. From 14 000 km’s away I just happen to be Pav’s. The U.S / Australian alliance has been going strong since at least as far back as World War II and there’s every reason to think that a list such as this one can only further bolster those relations.

Matt, the Atlanta-based chief notions officer and gifted scribe behind ACCIDENTALLY INSPIRED, and I have never met. It’s also unlikely we ever will meet. But that hasn’t stopped me two years running now (read last year’s honour roll list HERE) from honouring him and his Halydron Collider of Ideas superblog with a pick of what I consider his twenty finest posts during the year. 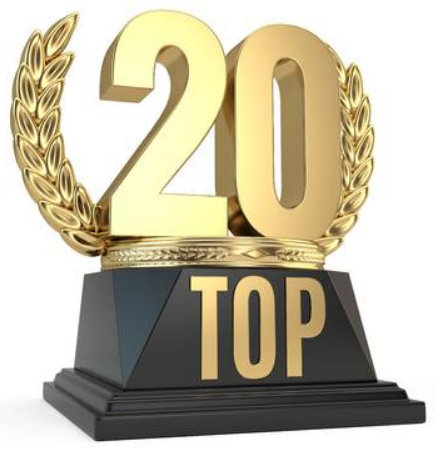 1.  (Sorta) Safe landings, or Hell Week in the Theatre (April)

In the kind of truly majestic extended metaphor only Pav himself could conceive, we are treated to a white-knuckle cockpit view of the staging of a High School theatre production – complete with all manner of organised chaos including actor’s laryngitis, sprained ankles and ill-fitting costumes. Trying to land a rickity Cessna light aircraft during a violent thunderstorm seems a walk in the park by comparison.

The pro’s and cons of library book enrichment – the practice of marking pages by folding over the top corners or even inscribing words in the margins – are uproariously unpacked in this classic post. Matt admits his librarian wife may not share his enthusiasm for what he terms “marking the trail for others.”

Because Pav’s dog follows him from room to room in their house she gets labelled an Attention Whore Dog. When the neighbours have a yard sale complete with all the accompanying noises of cars coming and going, doors slamming and muffled voices from the driveway – noises his dog associates with Matt and his wife coming home from work – the results are high-grade comedy.

Vampire flash fiction you can really sink your teeth into. Any story that includes a character named ‘Thierry’ is welcome by me.

Our Matt finally sees the light does a glorious tango with the joys of non-fiction reading. In the process he rolls out perhaps his best analogy of the year – something about a salad bar, leafy greens and piles of mashed potatoes.

6.  A Foolproof Method for Decluttering Your Home (July)

Self-confessed clutter expert Pav details a nine-point plan to home-treat your inner hoarder. This post came with a picture of our budding pro-author’s bedside table playing host to nine books, a pack of highlighters, his keys, a tape measure, a pair of socks, two notebooks, a pair of socks and several headphones. Expert indeed.

7.  Hammer Time (A Scientific Study in How Dumb You Can Be) (March)

While trying to drive in a nail he bangs his hand with a hammer. Accidentally. In front of a student. We shouldn’t laugh. But we do. A lot.

Our Acccidentally Inspired ‘host with the most’ applys his considerable film critiquing abilities to that classic of children’s cinema The Little Mermaid (1989) but concludes he probably shouldn’t examine kid’s movies so forensically. He freely admits to messing with his son’s head when called upon to answer questions from him relating to the movie.

Pav gets honked at while he’s out jogging by an early morning motorist intent on delivering an unprovoked ‘thrill beep’ designed to unsettle and unnerve.

Different surroundings and routines while on vacation play havoc with Matt’s writing process. Top shelf analogies come flying thick and fast including the restaurant reservation one, the swanky gym on the opposite side of town one and the behind bulletproof plexiglass one.

Channeling his very finest Star Wars ‘Jawa’ chic, dress-up Matt posted this photo of himself early in the year. It’s mysterious, quirky and ‘awkward-author-ish’ enough to easily earn my Pic of the Year Award.

Matt liken’s the feeling of getting back to work on writing the novel he hasn’t touched in a while to turning on a cobweb-covered tap around back of an old abandoned farmhouse and finding, to one’s relief, twisting the faucet still produces cool, fresh water.

Eight years in the job allows Matt to reflect that teaching is an occupation with a built-in automatic renewal system called ‘Summer Break’ that allows employees to annually ‘degunk’ themselves.

Our doyen of the priceless quip acknowledges some books are more sleep-inducing than others before going on to concede Stephen Hawking’s A BRIEF HISTORY OF TIME (1988), though intellectually stimulating in the extreme, is, excitement-wise,  definitely no edge-of-your-seat, white-knuckle thriller.

Eight year old with a toy gun on the loose in a public playground. “BANG BANG YOU’RE DEAD.” Scarey. Not Funny. Real.

15. Things not to Say to an Atheist (January)

Continuing to mine the more serious vein of ACCIDENTALLY INSPIRED, this post impressed for its sheer degree of restraint in the face of one-eyed religious zealousy. Matt receives an intelligence-accosting comment on his post from a god-fearing church-goer who claims to pity him for his lack of bible-centred faith. Logic and a cool head win over flapdoodle every time. Praise be the Pav!

Pav slaps his own wrist for overusing the phrase – ‘The Spell is Broken’ in his novel. Bad Pav will need twelve umbrella drinks and a good lie down to get over his own chastisement.

Never one to toot his own horn, Pavman does the hard stuff, invents a way to claim significance for just about anything and cites one of his literary heroes Douglas Adams in the process. And as a finale worth reading to the end for, unceremoniously boos off stage so they never want to come back disclaimers, self-sabotage, false modesty and the pimple-faced rat that is the wholly wretched practice of knocking yourself down before you’ve properly gotten up. Empowerment came gift wrapped and placed neatly outside our doors in this grand post.

19. An American’s Guide to Canadian Food (May)

Fresh back from a vacation in Canada, self-confessed non-foodie Pav concludes the stuff to eat there is weird. Beware: this post comes with a harrowing account of what ‘Dulce’ is.