I sent out my first query at about seven last night.

A kindly worded, encouraging rejection, but a rejection nonetheless.

It’s okay. I was prepared. Rejection is the name of the game, so I hear, and I had no illusions that the first shot into the blue would strike a rainbow or anything. I sent it off the way I buy a lottery ticket — much more this almost certainly won’t work, but wouldn’t it be awesome if it did than THIS IS THE ONE — so the rejection is not in any way shocking.

What surprises me is how little it bothers me. Seriously. I went to bed feeling not terribly upset about it, but I figured I was still in shock over the fact that I actually mustered up the nerve to send it off in the first place. But I woke up still feeling not all that upset about it. Kind of like finding a bunch of fallen leaves and pine straw on my car: not what I particularly like to see, but not unexpected, and certainly not going to impact my day in any way.

A far cry, in other words, from the soul-crushing despair I might have expected after submitting the fruits of over a year of work to one of The Gatekeepers and receiving a resounding “eh” in return. I feel like I should be thrashing in an existential tsunami of doubt. Like I should be questioning every creative thing I’ve ever done. Like I should be getting seriously depressed about all the time I spent working on this thing. But I’m not doing those things.

This confirms — for the moment, at least, but check back with me after maybe a dozen rejections — what I’ve always known about writing: the hardest thing to do is to actually start doing the thing. The step that always seems impossible is the first one. 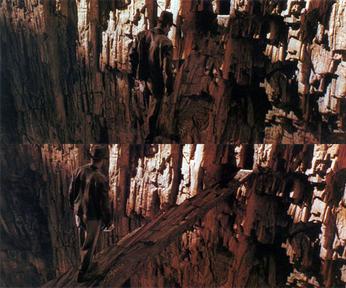 It’s like in Indiana Jones and the Last Crusade. There’s that cave on the other side of the cavern, with an impossible chasm in the way. The only way to get there is a leap of faith. He resists every natural instinct in his body and steps out into the void, only to find out — there’s a bridge. Just not one he can see from where he’s standing.

The worst part is over. The leap is behind me. And all of a sudden, that step doesn’t look nearly so intimidating at all. Kinda makes me feel silly for dreading it so much.

In fact, the second letter has already gone out this morning.

3 thoughts on “On My First Rejection Letter”