Winnie the Pooh is a Masters’ Level Writing Class

I’m sitting here watching The Many Adventures of Winnie the Pooh with my kid. You know, the one from the 70s that’s less a movie and more a bunch of cartoon shorts slapped together with honey-flavored caulking.

Now, there’s a lovely little book that came out some time ago called The Tao of Pooh, which takes the silly old bear and infuses him with all sorts of Zen mysticism. (Actually, the mysticism was in him all along, we just didn’t always realize it.) And that book has a companion called The Te of Piglet. Fantastic reads that you can pick up and put down as often as you’d like; the kind of books that grow with you. The kind of books that mean something entirely different to your full-of-piss-and-vinegar twenty-something self and your tired-as-fargo-from-wrangling-toddlers-all-weekend thirty-something self.

But I realized, watching the cartoons just now, just this instant, that you don’t need a zennified book to appreciate the dubious wisdom of Pooh. The beauty is in the simplicity. And as a writer, the simplicity resonates on several levels. 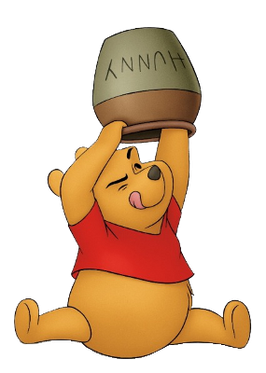 We meet Pooh in his house, and Pooh wants some damn honey. Why? Because he’s a stuffed bear, and fargo your reasoning; his honey stores in the house are empty, so he’s got to go get some more. But he doesn’t have a grocery store with a plastic bear full of honey to overpay for; he’s got to go straight to the source. Who makes honey? Bees do, so Pooh goes after the bees.

He climbs a tree and tries to just straight-up jack some honey, but the bees aren’t playing that, and the twiggy brances at the top of the tree can’t support his honey-eating behind, so he falls all the way back down. Is Pooh discouraged? Not for a minute. Along comes his pal, Christopher Robin, with a balloon of all things, and Pooh says, hey CR, let me snag that balloon so that I can use it to get some honey. CR is no fool, and he asks the question that we’re all asking, watching this: how are you going to get honey with a balloon?

Don’t be silly, says the bear, I’m going to use the balloon to float up there. The bees will think I’m a raincloud, and they’ll let me have the honey. Now, this is patently idiotic, and being a good friend, CR points this out to him — you don’t look like a raincloud.

Right, says Pooh, let me roll around in some mud so I’m all dark like a thundercloud. So he rolls around in the mud for a minute, gets good and disgusting, then floats up to the treetops. This works until the bees realize that the bear is ganking their honey again, so they attack him and he ends up falling all the way down again.

Bees aren’t parting with their honey, he realizes, and goes off to his buddy Rabbit’s house, where he just asks for some honey without any niceties or prelude. And Rabbit gives it to him. Gives him so much, in fact, that Pooh can’t even squeeze his honey-stuffed stuffing out through the door anymore, and he has to go on a two-week diet before he can even go home again.

Let me not spoil the whole program for you if you haven’t seen it, but suffice to say, the shenanigans continue. All are ridiculous and wholesome, and all are approached with the same oh-well-I-guess-if-that’s-the-way-it-is-we’ll-just-have-to-change-the-way-we-think attitude.

So why is this relevant to the writer?

Pooh wants honey and he sets himself to the task with the single-mindedness of a cat stalking a crippled lizard.

In short, once he decides he wants it, there is no force on earth that is going to stop him.

So it must be with the writer.

Sometimes the direct route is all it takes to get us there, but more often, the direct route is a boring and ineffectual route. We have to get outside the box. Sometimes that means redesigning the box, burning it, designing it again, throwing it down a flight of stairs, and building another box from the shattered pieces, then stepping into the box just for the purpose of stepping back out of it. And sometimes, we just need a little help.

Let’s get some honey.

I am a teacher, runner, father, and husband. I am an author-in-progress. I know just enough about a lot of things to get me into a lot of trouble. END_OF_DOCUMENT_TOKEN_TO_BE_REPLACED
This entry was posted on Tuesday, April 26th, 2016 at 7:36 PM and tagged with funny, hidden wisdom in kids shows, humor, inspiration, kids shows, movitavion, things writers need, winnie the pooh, writing advice and posted in Dubious Advice, Ramble, Writing. You can follow any responses to this entry through the RSS 2.0 feed.
« Useless Measurements
How’s It Going? »