When a nun pledges her life and her various other parts to God, she goes to live in a convent. Those convents have some fairly archetypal architecture, like what you see below: 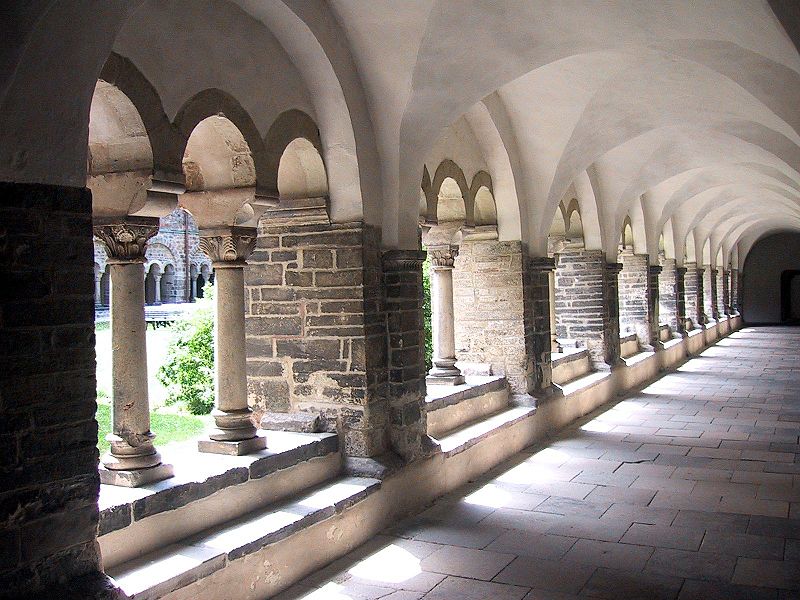 This covered walk is called a “cloister”, and this particular feature of religious buildings led to the expression of something being “cloistered”, or shut in and closed off from outside influences.

We won’t be going, today, into the particular irony of a religious institution requiring its most devout believers to live such a cloistered existence, or the fact that such an idea itself comes from religious ideology.

Rather, the metaphor of the cloister. It’s an important one, a powerful one, because so many of us live cloistered lives. We wake up at the same time, drive the same roads to work, see the same people, eat the same things for dinner. Our own footsteps mark the boundaries beyond which we dare not tread.

And there’s something to be said for that. Routine is important, and not only to the writer. (Just try moving naptime up by an hour on your three-year-old, for example.) But as much as time inside the box is vital for our comfort, well-being, and peace of mind, so too is time outside the box critical to keep us from living life in a rut. I realized the other day that I have some co-workers who are almost friends (as close, I guess, as a co-worker that you only ever see during work-related functions can come to being a friend) whom I have not seen in months. The reason? Their classrooms are on the other side of the building from mine.

You can find the cloister as deep down as you care to drill. I write at pretty much the same time every day, even down to the weekends. I park in the same parking spot at work, even though we don’t have assigned parking. I run the same routes over and over when it’s runday funday. We even try to have the same meals on the same nights of the week, just to cut down on that tiresome discussion: “well, what do YOU want to eat?”

It takes effort to break out of the cloister. We’re so closeted in with our routines, with what’s normal and easy, that we resist doing anything else. Our cloisters are climate-controlled, with blackout curtains and indoor plumbing. If we don’t make the effort to leave them behind now and then, they can and will swallow us whole.

So, how will you break out of your cloister this week? This month? This year? (Don’t wait to make a New Year’s Resolution — start today.)

The Wikipedia and Wikimedia Commons image above is from the user Chris 73 and is freely available at //commons.wikimedia.org/wiki/File:Cloister_of_the_monastery_Unser_Lieben_Frauen_Magdeburg.jpg under the creative commons cc-by-sa 3.0 license.

14 thoughts on “The Weekly Re-Motivator: Cloistered In”