The Weekly Re-Motivator: Write From the Wayside

If you look down the path any writer has walked, you’re likely to see piles and piles of detritus littering his footsteps. Busted plots like broken wagon wheels tossed by the wayside. Failed or half-formed characters curled up like dead beetles, hollow and husk-like, waiting for the broom. Exercises and sketches and scattered bits of dialogue and unturned plot twists like so much broken glass and twisted slag. People think of writers as creators, but they destroy and abandon twice as much again as they ever shape to completion.

But it’s a poor writer indeed who walks that path, strews the debris of all the ideas that didn’t make the cut in his wake like so many dead fish after an oil spill, and doesn’t double back now and then to pick through the scraps and see if a scarecrow can’t be fashioned out of the trash. 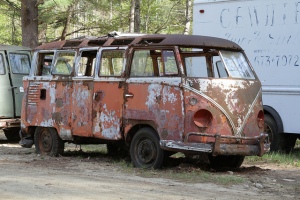 Because, sure, we toss those ideas out the window, discarded cheeseburger wrappers fluttering on the wind, because they didn’t work, because they don’t fit, because something about them makes them not belong. But just because an idea didn’t work with this project, doesn’t mean it can’t work for any project. We’re like sharks. If we stop moving, we die, and when one idea has run its course, the next one bubbles to the surface like the breath of some great beast of the deep. A writer has to be a hoarder, ready to cover old ground and see if some of those old puzzle pieces fit with the new project better than they fit with the old.

But you’ve got to keep that slush pile.

Whether it’s old notebooks covered with chicken scratch and legions of notes hastily scribbled in the margins, or an overflowing cache of text documents in a dusty folder in the depths of your hard drive, or reams of parchment in the forgotten tongues of Eldritch terrors, those ideas have to be allowed to hang around. There’s no room for minimalism in the mind of the writer. There’s no sense in cleaning out the garage. A writer is only as good as his storehouse of ideas, only as good as the engine of his creativity.

So as you write, be ruthless. Be brutal. Cut the dead weight with savage abandon and cast by the wayside that which doesn’t make the story sing. But keep a roadmap, so you can find your way back to the gems that you leave behind.

I am a teacher, runner, father, and husband. I am an author-in-progress. I know just enough about a lot of things to get me into a lot of trouble. END_OF_DOCUMENT_TOKEN_TO_BE_REPLACED
This entry was posted on Saturday, August 15th, 2015 at 12:06 PM and tagged with creativity, editing, inspiration, salvaging a bad idea, the junkyard of lost ideas, where do ideas come from, writing about writing and posted in Writing. You can follow any responses to this entry through the RSS 2.0 feed.
« Writer Moments: The Tipping Point
How to Write an Ending Like a Boss: Ask Pixar »

8 responses to “The Weekly Re-Motivator: Write From the Wayside”