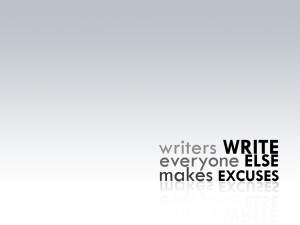 From the time I wake up in the morning until the time I lose consciousness at night, my brain is like a leaky roof. Everything gets in. Too much traffic around this area. These people not getting the recognition they deserve. Those people just generally being inconsiderate asses to everybody else in the world. These little things seep in, like so much rain through old, patched-up shingles, and they soak the rafters in my old brain and start festering.

From the seeds of those spores (okay, seeds aren’t spores, whatever, I don’t science) I turn from observation to questioning. Why does traffic suck? What aren’t these people doing to get their recognition? What makes those people act like jerks?

From there, it’s conjecture. Maybe the traffic sucks because on the day the city planner designed this intersection, he’d just come in from a bad row with his wife over some unseemly texts on his cell phone, and he created a turn lane where what he really meant to do was bury the area underground with a few well-placed sticks of dynamite. Maybe these people aren’t getting recognition because deep down they don’t really need it, and they do the things they do not for fame and glory, but because it’s right and necessary. Maybe those jerks are jerks because they really don’t understand how society works, because nobody bothered to teach them, or because they haven’t actually taken off the blinders and have been staring hypnotized at the same clutter on their desks and the same general area around their television for the last EVERY YEAR OF THEIR LIVES.

Then, a strange alchemy occurs. Most of the thoughts I entertain throughout the day flow through the mind like water cycling through the toilets in your house before it returns to the sewer, but every now and then, a spark happens. I don’t know what causes the spark. If I did, I’d be making millions selling self-help books to writers (there’s a market for that, right?). But the spark reaches like the finger of a lackadaisical God down to one of these nonsensical musings and breathes life into it. Like an angry hornet trapped in the back windshield of a hot car on family vacation, that idea starts buzzing like a demon, throwing itself against the walls, crashing into the face of every innocent bystander it encounters. It makes itself unignorable, it demands to be heard, and whatever else I had in mind clears the fargo out of the way for fear of getting stung by this possessed seedling of a story.

I write to let the goldfingered hornets out of the car.

Until I put virtual pen to virtual paper, the car just fills up with those things until all I can hear all the time is a dull buzz behind everything, like the world is a radio station that’s tuned off the dial just a hair. Problem is, I didn’t realize until recently that that’s what was happening. I just thought that’s how the world was; a droning buzz filtered through the unholy cacophony of a car full of bees. And there was nothing wrong with that. But when I finally got off my donk and started writing regularly, it felt a little like those people putting in cochlear implants and hearing their own voice for the first time.

And it’s not just stories. Sure, writing is about giving the leash over to that angry hornet for a while and seeing what it has to say. But writing also allows me to focus my thinking, to bring under the microscope my meandering, jumbled thoughts on whatever issue is buzzing up my head on a given day. It gives me a productive way to process all the funny/weird/sad/infuriating/touching/puzzling/amazing things that happen in this life.

The point is that we’re all going to die one day. The only difference between a me who writes and a me who doesn’t is that the me who doesn’t write might be remembered by family for a few generations, while a me who writes might stick around in a general consciousness a little bit longer. In that way, I guess, my writing is motivated by a fear of being forgotten, by a selfish desire to make an impact on the world, no matter how small.

Writing, then, is a daily release, a self-guided meditation, a barbaric yawp into the void.

Writing is a way for me to envision a better world and ponder about how it might be brought forth.

And writing is, of course, about telling stories. I don’t think the human machine will ever satisfy its appetite for good stories, and if you can tell a good story, well, that’s your ticket to a kind of immortality.

I am a teacher, runner, father, and husband. I am an author-in-progress. I know just enough about a lot of things to get me into a lot of trouble. END_OF_DOCUMENT_TOKEN_TO_BE_REPLACED
This entry was posted on Monday, July 27th, 2015 at 8:16 AM and tagged with inspiration, motivation, where do ideas come from, why do i write, why i write, writing as therapy and posted in Writing. You can follow any responses to this entry through the RSS 2.0 feed.
« The Weekly Re-Motivator: Visionary
The Narrative: Break It to Fix It »

9 responses to “Why I Write”