So the prompt for the week is the root: vis.

Now, I could interpret it in any number of ways, not least of which might be a fanfic about Elvis, but I just can’t kick this one impression from my mind: the word visionary. A lot of things get that label these days, probably because we no longer have any use for any modifier that is less than the superlative. (Things can’t, and shouldn’t, just be good. They have to be legendary, or epic, or un-fargoing-believable. We have built up a tolerance, through internet extravagance and the squabble for views and clicks, for anything short of eleven.)

What’s a visionary? It’s more than just a person who sees something where everybody else sees nothing. The visionary sees the world as it is and forces the rest of us to see it as it could be. Which is tied in to the reasons I write, actually: see my next post for more on that. 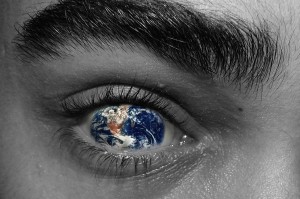 Make no mistake, the world is amazing, and our position in it is even more amazing still. The fact that we exist in this universe alone is nothing short of astonishing, but the fact that we lead existences where we can relax and have hobbies and find love and get fat and sleep in as opposed to, you know, living or dying based on luck and the migratory patterns of predators transcends that. Life is awesome.

But it could always be better, couldn’t it?

That’s the domain of the visionary. Looking at a world that is already filled with good things and saying “let’s make it even better with flying cars and automated computer systems and remote controls so that you don’t even have to get up off the couch. Think about that. When television was first thought of, there was no remote. The mere idea of moving pictures, dancing and warbling in your living room, was so earth-shattering that nobody’s first thought was, yeah, it’s nice, BUT… But then, fast forward a few years, and somebody thinks to himself, I love television, but I hate getting up to change the channel. What if there was a way to switch the magical moving pictures without getting my donk out of this chair? And within a few years, WE HAVE IT. Not only do we have it, but now, it’s so much a part of the television-watching experience that my wife and I will wander around the house for hours on end looking for the remote, because you can’t even watch TV without it any more. Seriously. The newest set-top boxes have no buttons on their frontsides  for changing channels; if you lose the remote, you’re hosed.

And I was planning to write about how the line between a visionary and a lunatic is a thin one, thinner perhaps than the shoes that angels use for dancing on the heads of pins. I think, however, it’s a lot more productive to dwell on the visionary who takes the imaginary pictures in his head and uses them to change the world rather than the lunatic who sees the visions and mistakes them for the world which exists. Except that it’s hard to argue that all the great minds, all the visionaries who have changed the world for better or for worse, were also probably a little bit crazy. But being crazy is easy. Becoming a visionary takes work.

I mean, that’s what we’re all doing, isn’t it? On some level? Taking the visions we have for our futures and working to make them a little bit more real?

I’m particularly fascinated with the idea because, as you may have noticed if this isn’t your first foray to my midden-heap of writerly self-doubt and strife, I’m working on a science fiction novel that necessitates a world fundamentally different from the one we inhabit. Day in and day out I’m struggling with the vision for this different world, figuring out how to monkey-wrestle it into something that will be palatable to a critical audience. Without getting my face bitten off.

I am a teacher, runner, father, and husband. I am an author-in-progress. I know just enough about a lot of things to get me into a lot of trouble. END_OF_DOCUMENT_TOKEN_TO_BE_REPLACED
This entry was posted on Saturday, July 25th, 2015 at 10:36 PM and tagged with blogging, creativity, stream of consciousness, visionary, visions, Writing, writing about writing and posted in Ramble. You can follow any responses to this entry through the RSS 2.0 feed.
« To Describe, or Not
Why I Write »

3 responses to “The Weekly Re-Motivator: Visionary”