We’re on vacation this week, which means I smell fantastic.

I smell fantastic because when we’re out of town, I mooch off whatever body wash / soap / chemicals my wife brings with her. (She overpacks, I underpack, and it has always struck me as silly for us to each expend effort bringing along soap which for all intents and purposes does the same thing. While we’re on the subject, can we talk about how silly it is that essentially the same products are marketed to men and women, just with different added ingredients — for more manly smells — and different packaging — for a more manly look. You can be a man and use the fruity-smelling stuff, and you can be a woman and use the industrial-smelling stuff. Actually, women, don’t use the men’s stuff. You know that 2-in-1 stuff ain’t doing anything, and for some reason they only market that garbage to men.) 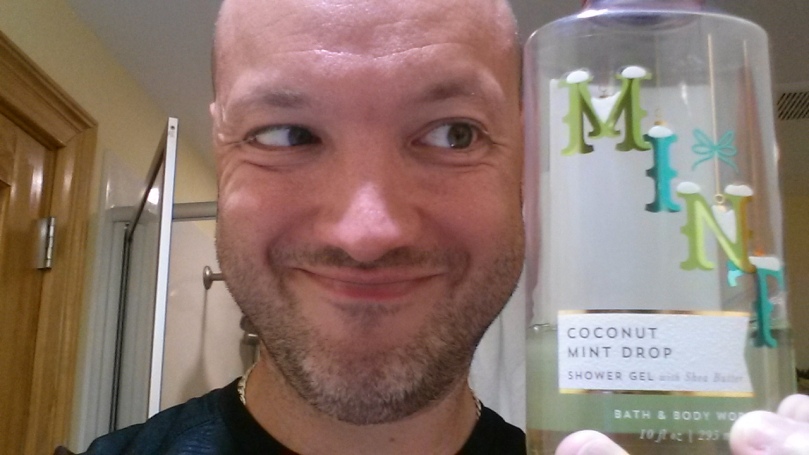 This week, it’s this Coconut Mint Drop (pictured — unshaven lunatic not included), which smells bloody fantastic, like — well, like a coconut and a mint got together and dropped off a baby. It looks like a leftover from Christmas time, what with the snow piled up on top of the letters which could be ornaments, maybe? I’m not sure what coconuts have to do with Christmas (what do coconuts have to do with anything, really — I should write a play about that) but somehow it works and it had me feeling positively festive this week.

In fact I’m gonna go out of my way and say I really enjoyed smelling like coconuts and mints because, I dunno if you know this or not, but here in the South we’ve been under extreme heat advisories all week: temperatures going right up to the mid nineties early in the day and staying there until the sun decides we’ve had enough and leaving us crying on the floor until the next day.

(As it turns out, you can have a heat advisory without it being “extreme”, but much like the South has no idea what extreme means when it comes to pollen counts — the scale goes from “low” at 10 or so to “extreme” at maybe 200, and Atlanta regularly has pollen counts of like fifty thousand — we seem to view the “extreme” classification as less a descriptor, more a challenge. You call that hot? We’ll show you hot.)

They call this phenomenon a “heat dome” which is fitting as anything because stepping outside feels like stepping into a Thunderdome of heat and misery and sweat and B.O. You spend about thirty seconds outside and your body goes into panic mode. Everything starts to sweat. The body physically wilts like a daisy in the desert. You go to wherever you’re going to and then you collapse and bitch about how hot it is, even though everybody with skin KNOWS how hot it is, so why do we pretend we need to talk about how hot it is?? (Actually, somehow, it does seem to help, which leads me to the conclusion that the human heat-response system is somehow tied into the brain’s language centers, which leads me to the further conclusion that humans are dumb and not particularly cleverly wired.)

The upshot, then, to smelling like fruit, is that for those first thirty seconds before my skin begins to melt, I smell, somehow, a little bit like Christmas in June.

And, considering the alternative, I’d call that a pretty good thing.

One thought on “The Fruity-Smelling Guy, Summer 2018 Edition”