So Brooklyn 99 got canceled. And the internet threw a spontaneous collective hissy fit.

And then, in virtually no time at all, it got picked up again, on a different network. And the internet rejoiced.

But why the outcry over a relatively mundane comedy? And why the rapturous happiness at its immediate renewal? And why, for that matter, did NBC scoop it up so immediately, when Fox was ready to cut it loose? People feel strongly about the show. Exceptionally strong. Why? (And yeah, in the Internet of Things, all kinds of people love all kinds of things and everybody gets rabid about the things they love, so outspoken fans are not exactly unique. But fans of Brooklyn 99 seem more rabid than most.)

I don’t think it’s the humor, though the show is very funny; it blends deadpan snark with brick-to-the-face slapstick and the simple, tried-and-true formula of putting ridiculous characters in ridiculous situations for maximum comic effect. But B99 is not the only show doing this.

More likely, it’s the show’s subtle message of inclusion, its all-are-welcome and all-play-by-the-same-rules ethos that you really don’t find on other shows right now. Consider:

Captain Holt is the leader of the precinct. He’s black, and gay, and super-intimidating and exceedingly protocol-driven. But he’s also overtly willing to learn from his subordinates, and becomes more father figure than boss to most of them. He also has frequent moments of badass and hilarity.

Sergeant Jeffords is the second-in-command. He’s black, and ridiculously muscular, but rather than making him the “heavy” or the “bruiser”, he’s first and foremost a family man. Always driven by his wife and kids, he often ends up dropping wisdom on the others in the show. He also has frequent moments of badass and hilarity.

Rosa Diaz is Latina and bisexual, and she’s also the most feared person in the precinct. Not because of her differences, but just because her entire demeanor is terrifying. Of course, under that demeanor, she’s got a gooey center, but she’ll still throttle you for pointing it out. She also has frequent moments of badass and hilarity.

Then there’s Hitchcock and Scully, the stereotypical donut-chomping desk jockeys, usually played for laughs but still given the occasional moment of badassery. Amy Santiago is insufferable and brown-nosing, but still gets regular moments of badassery. Charles Boyle and Jake Peralta are the awkward cop buddies who seem to subvert every cop buddy trope, but they still feature in the show’s moments of badassery.

The show is an equal-opportunity feature machine, in other words, giving every character — regardless of what you may think you know about what makes them who they are — a chance to show out and, ultimately, just be a cop. Everybody gets to save the day. Everybody has others depending on them and actually follows through.

And that, I think, is what makes the show work so well. The character differences serve the comedy — yes, of course — but they also tell you only so much about the characters: what really tells you about the characters is watching how they cover for each other, how they get each other’s backs, and how little they care about their differences. What makes the show work with all its diversity* is the fact that the diversity is basically never addressed, and it’s never played for cheap laughs.

Point is, B99 isn’t all in-your-face with its inclusion — the inclusion is just part of the fabric of the show, which means you basically don’t even notice it.

Which I think is why people lost their minds when it got canceled. (And likewise rejoiced when it was saved.) It’s nice to have stories where people who are different don’t just have to talk about their differences all the time. The cops on B99 are cops first, human co-workers second, and, somewhere way down the line, they’re also ethnically diverse.

And let’s be honest: the show is funny as hell, too. That doesn’t hurt. 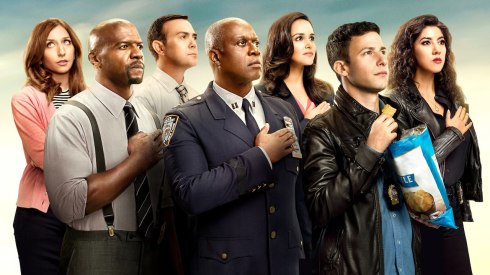 Image is owned by Fox. For now.

*note that a show that includes a non-white individual or two just for the sake of having a diverse cast kind of misses the point. Have them, yes, by all means. But make them part of the storyline, and better yet, make the stories about them without making the stories about their differences.

I am a teacher, runner, father, and husband. I am an author-in-progress. I know just enough about a lot of things to get me into a lot of trouble. END_OF_DOCUMENT_TOKEN_TO_BE_REPLACED
This entry was posted on Monday, May 14th, 2018 at 3:57 PM and tagged with brooklyn nine nine, comedy, diversity, inclusion, rules of funny, television shows and posted in Ramble, Writing. You can follow any responses to this entry through the RSS 2.0 feed.
« Meta-Meta-Analysis on Journaling
Your Thoughts »