The post is late this weekend because Atlanta literally got buried this weekend. In my neck of the woods, it was almost a foot of snow, which in Atlanta is basically the equivalent of encasing the entire city in Amber to be fished out and mined for DNA by overzealous scientists in hopes of making dinosaurs many millenia in the future.

I know, I know. Much like the “blizzard” of three years ago which sealed the city in an icy tomb from which it didn’t emerge for five days, the rest of the country is laughing at us. The south can’t handle snow. We get it. This time is legit, though. Below is a horrible-quality picture (thanks smartphones for not knowing how to handle flash settings and low light) of me standing by our fence. Notice that it’s literally deep enough to cover my entire head, were I to stand on my head, which is a thing I might be likely to do, given that I’m a southerner and do not know what snow is for. (You can cook with it, right?) 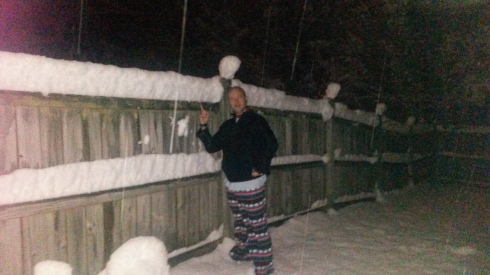 (No, those are not my wife’s pajama pants. They are mine. And they are most comfortable.)

Snow would continue to fall for twelve more hours. I’d have more pictures of the coverage, but a) do a little google image search for “Atlanta snow” and you’ll come across scads of pictures better than anything I could take (and funnier jokes, too!) and b) my kids ruined the pristine blanket immediately, because that’s what kids get paid to do.

More to the point, though, the heavy snowfall was bringing down branches and trees like Mueller is bringing down Trump associates, leaving us (and hundreds of thousands of our closest relatives and neighbors across the state) without power all night and most of the day on Saturday. And there just isn’t enough liquor in the county to deal with problems like that. So we did what any red-blooded, 21st-century humans would do: saddled up the kids, loaded up the minivan, and drove to Grandma’s house to spend some time with family.

Luckily, aside from a bunch of power outages, a healthy share of downed trees, and a truly maddening array of pictures of people on their back porches sticking measuring tapes and rulers into the snow (rest assured, I have my own pictures, but I won’t cross that particular line of insufferability), there does not seem to have been much loss of life or injury caused by this little winter surprise. Which is to say that, after a second straight day of sun in the wake of the storm, life will quickly return to normal. As life is wont to do.

Which means that when I’m late with the Saturday post next week, I’ll have to make a much more pedestrian excuse. (Which may or may not involve actual pedestrians. Stay tuned!)

I am a teacher, runner, father, and husband. I am an author-in-progress. I know just enough about a lot of things to get me into a lot of trouble. END_OF_DOCUMENT_TOKEN_TO_BE_REPLACED
This entry was posted on Sunday, December 10th, 2017 at 8:31 AM and tagged with atlanta, funny, snow in atlanta, snowpocalypse 2017, stream of consciousness and posted in Ramble. You can follow any responses to this entry through the RSS 2.0 feed.
« Metaphor Monday: Mr. Fix-It (Eventually)
Metaphor Monday: The Snow Field »