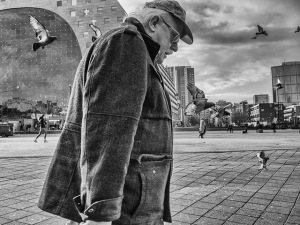 “I’ve never dated online before,” says Greg, fidgeting with his spotted hands on the linen tabletop. It’s a lie, but one he never gets called on.

Theresa, a silver-haired beauty, grins with downcast eyes at her silverware, her face flushing a little. “Me, either.”

“Just one.” She can’t help herself. She reaches for her phone and shows him a picture of the little angel, slumbering in that striped hospital blanket. “Two weeks old.”

“Ahh, it’s the best. You’ll see. Even better than having kids of your own.”

She’s wonderful, really. Just like his wife in a lot of ways — same hairstyle, same easy way of talking. But then, she’s different too — quicker to laugh, with a nervous energy that keeps her looking around the room, knotting up her napkin. None of them are his wife, but there’s always something to like. She could be the one.

And then it’s over. Pleasant, but abrupt. She doesn’t look back as she walks away, doesn’t promise to call. Probably won’t call. They never call. He sighs and shoves his fork into his half-eaten portion of tilapia. Wishes he’d just ordered the burger he wanted. Stupid diet. Stupid doctor’s orders. A pigeon flutters up and lands in Theresa’s spot at the table, stabbing its beak at the rice pilaf she didn’t finish. He throws a spear of broccoli at it, and it flaps irritably away.

In his pocket, a newspaper clipping. Ragged at the edges, soft as feathers from all the times he’s handled it and not called the number. He frowns at the back of Theresa’s silvery head. He calls the number.

It arrives eight days later: a tiny brown box the size of his palm. Not what he was expecting. No flashy marketing inserts, no fancy designer packaging, only an unlabeled brown medicine vial with a dropper nestled in downy cotton packing. Beneath all that, a note: A few drops will make you irresistible to females! Use with caution!

No sense in waiting.

“Another first date, Greg?” Marcus, the waiter, grins at him as he pours him a seltzer.

Greg nods, almost giddy. He thumbs the vial in his pocket.

“I never see you here on any second dates. You take them someplace nicer?”

“Never been so lucky. But today’s different.”

“Something special up my sleeve. That’s the secret with these older birds; you have to work a little harder.”

“I’ll keep that in mind.” Marcus flashes him another smile: perfect teeth against his dark skin.

Greg watches: Marcus turns the corner inside and gooses the pretty little waitress. She playfully swats his hand away, then plants a quick, affectionate kiss on his cheek. Young love. So easy, so effortless, like falling into a soft, downy mattress.

Maybe it’ll be that easy for me this time.

Linda’s due in ten minutes. He produces the tiny vial, looks around to make sure nobody’s looking, then squeezes out a few drops on his outstretched fingertip. It’s viscous and gritty, almost like birdlime, but it’s got this pungent aroma of … what? The sea? The sky?

Out of nowhere, a pigeon lights on the table right in front of him, staring at him with round, vacant eyes. It bobs its head a few times.

“Shoo.” He swats at it and it flies away, gurgling. The arc of its flight draws his gaze up toward the street, and he sees her — Linda. Pretty as her picture, red hair feathered and falling around her shoulders as she approaches. She hasn’t seen him yet. He dabs the oily stuff behind his ears. At an impulse, he squeezes out a few more drops, which he rubs into his hair.

Before their drinks arrive, another pigeon — or maybe the same one? — coasts lazily in and settles on the table opposite. By the time Marcus brings the appetizer, there’s a second bird perched there. They’re staring at him, like customers at a deli awaiting their turn. Linda doesn’t notice them, but Marcus does — with a languid wave of his hand, he scatters the critters, and Greg sighs his relief.

But by the time Greg sinks a fork into his seared trout, the two pigeons have returned and become four. They watch him implacably as Linda chirps on about the men she’s dated and divorced. More and more arrive. Another winged watcher lands as Greg picks up the check. Linda’s saying she’d really like to see him again, but Greg can’t focus on her at all for the dozen denizens of the sky sitting opposite. Then he notices she’s looking at him, waiting for a response. Oh. Turned down again. He forces a little smile, says he understands, wishes her luck in the future.

Linda’s face falls to pieces like an egg dropped from a nest. She stands, mumbling in disbelief, looking around, lost.

Her claim on Gary vacated, the birds descend. The first one swoops at her and she bats it away. Another tangles its claws in her hair. They chase her down the sidewalk in a flurry of flapping wings.

When Marcus arrives to take the bill, Greg has been swarmed. Pigeons roost on his shoulders, nuzzle at his knees and ankles, lightly bonk their heads against his fingers as he drums them on the tabletop. One nips lovingly at his thinning hair from its roost on his bald spot.

It’s been a little while since a Flash Fiction challenge. I really can’t apologize enough for the ending.

Anyway, this challenge comes as usual from Chuck Wendig: the random photography challenge. I found the photo above by Peter Meijer, and, well. He just looked so weary.

I am a teacher, runner, father, and husband. I am an author-in-progress. I know just enough about a lot of things to get me into a lot of trouble. END_OF_DOCUMENT_TOKEN_TO_BE_REPLACED
This entry was posted on Sunday, January 10th, 2016 at 12:43 PM and tagged with 1000 words, chuck wendig, Flash Fiction, flickr photo challenge, funny stories, peter meijer photography, sad stories, short story and posted in Flash Fiction. You can follow any responses to this entry through the RSS 2.0 feed.
« The Weekly Re-Motivator: Die Hard
I Hate Everything »