When we talk about writing, we’re usually focused on the glitzy stuff. LOL JUST KIDDING, as if there’s anything glitzy about sitting in our darkened rooms, pounding feverishly on our keyboards until we collapse from exhaustion and despair.) That act of raw creation is what non-writers think about, it’s what burgeoning writers focus on, it’s indelibly the picture of what a writer does. Rightly so. 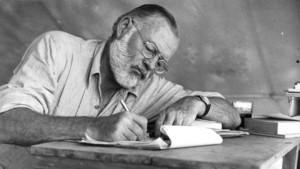 If only I could look like such a boss when I write.

Sitting down to write the draft, spilling the words forth onto the page is what it’s all about. Whether it’s the unstoppable flood of a river smashing through its dam or the pained trickle of a man with a swollen prostate, the writing is what matters. Word count. Finished chapters. The flutter of ink-stained pages landing on the pile.

But it’s not the whole picture, not by far.

The first draft, magical though it may feel, results in something you wouldn’t want to bring home to meet your parents. Like a Frankenstein’s monster made of mismatched limbs or a garage-built car constructed from nothing but spare parts, the first draft is imperfect, incomplete.

My wife makes a hell of a cheesecake. The process is simple: whip all the ingredients together, smash them into a mold, bake at 350. But it’s not done after it bakes, not nearly. It comes out of the oven and goes straight into the fridge to draw all the heat out of it, to actively stop that act of creation that causes all its components to chemically react. Only then — only after it’s lost all the heat of its making and had a chance for its parts to settle, compact and congeal — is it ready for the finishing touches, its layer of cream frosting, its drizzling of cherry syrup.

The time not cooking, in other words, is just as important to the finished product as the cooking itself.

So it is with writing.

You pour the raw ingredients of character and conflict into the mixing bowl and beat furiously for the first draft, then toss it into the oven of creation for a while for those conflicts to bake, boil, and bubble over. You drain yourself as a writer and channel all that energy of creation into the making of this thing. And then you throw it in the freezer.

Take it off the fire of creation. Remove the heat of your emotions for all its little parts. Give it some time alone to settle, and more importantly, give yourself time to cool off. Put those emotions about the story into storage and do your best to forget about the damn thing for a while. Only then can you come back to the story level-headed and clear-sighted enough to put the proper finishing touches on.

Now if you’ll excuse me, I think we’ve still got a bit of leftover cheesecake in the fridge.

I am a teacher, runner, father, and husband. I am an author-in-progress. I know just enough about a lot of things to get me into a lot of trouble. END_OF_DOCUMENT_TOKEN_TO_BE_REPLACED
This entry was posted on Saturday, December 19th, 2015 at 7:52 AM and tagged with baking a cheesecake, blogging, editing a novel, stream of consciousness, Writing, writing a first draft, writing about writing, writing is like, writing is like baking and posted in Ramble, Writing. You can follow any responses to this entry through the RSS 2.0 feed.
« Star Wars: STOP (but really, don’t ever stop)
I Write Like Awesome Writers »