Chuck’s challenge this week: a Random phrase to be worked into the story. (Random phrase generated by this site — which is kinda interesting on its own.) The phrase I pulled, of all things, was “perfectionist raft.”  Believe it or not, I managed to take even a silly thing like that and turn it dark. Maybe something is wrong with me. Anyway, what resulted is below. I even managed to trim it to a lean 1000 words, down from 1400 or so in its first draft. 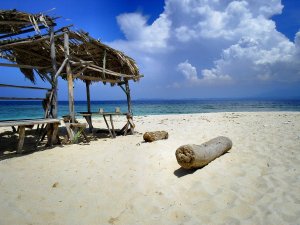 I can’t believe I’m writing this. When our plane crashed, I thought for sure we’d be rescued within twenty-four hours. But here we are, day three, and we’re still not rescued. Why not keep a journal?
It’s funny: all I really want is a good shave. Nothing but mangoes to eat and collected rainwater to drink for three days, and all I can think about are these damn whiskers rasping every time I scratch my cheek. Air Transit is going to get a letter from me, you can believe that.

I forgot to mention the other survivors, and by forgot, I mean I was hoping they’d die off. There’s Collin, an obsessive compulsive who will only bring mangoes back to camp in multiples of ten and who keeps trying to wash his hands in the rainwater. Then there’s Sasha, who I’m pretty sure is a Russian mail-order bride. Speaks not a word of English. Then there’s me. With my dropped-out-of-boy-scouts knowledge base to draw from, maybe I can whittle us some shelter out of a palm tree, except: did I mention we don’t have any blades or tools at all? It’s a wonder I even got a fire started, though Sasha was giving me impressed looks after I did. Maybe one day we’ll have to repopulate this island.

There’s something weird about this island. I couldn’t put my finger on it at first, but I realized this morning there are no insects here. At all.
Collin walked the perimeter of the island yesterday, confirming that it’s entirely uninhabited except for a few birds. The birds might be a good sign — wouldn’t that mean there’s other land within, I dunno, flying distance? Anyway, he said it took him exactly 12,003 steps to get around the island and then he wouldn’t shut up about the extra three steps for hours.
Sasha gave me the eye again after Collin left, but I couldn’t even think about it. I haven’t had a solid shit since the first night. Goddamned mangoes.

Collin got his trip around the island to an even twelve thousand for the last two days in a row and he says he’s going to do it every day, says it makes him feel productive. At least it’s something to do. It’s been almost two weeks. Starting to think we might not get rescued at all.

A whole bunch of debris washed up on the east shore of the island today. Collin found it on his daily sojourn, and suggested we move camp over there so that we can go through it and see if there’s anything we can use. He thinks it’s wreckage from our airplane. Fine by me. Maybe my Norelco is in there.
I keep hearing this weird buzzing sound at night, but when I wake up, all I hear is waves.

God has a sense of humor. I found my carry-on, and my Norelco. Of course, A) it’s waterlogged to hell and B) where would I even plug it in? I feel like I read in a Chemistry textbook once that you could make a battery out of a lemon and some electrodes. I wonder if that would work with a mango.

Collin thinks he can build a raft out of what’s left over from the wreck. A raft. I’m helping him, but only to give myself something to do.
Sasha lost her mind and started drinking seawater at sundown. Now she’s vomiting her brains out and keeping me awake.

This crazy electrical storm struck in the middle of the night last night. It woke me up, and I walked down to the water’s edge and watched the lightning lancing down into the ocean like the trident of … is it Poseidon that rules the ocean? Sasha was there, just staring off into the waves, saying nothing. For some reason, I thought of the raft. Something’s not right about it. It makes me nervous.

Sasha’s gone.
Woke up this morning and she was nowhere to be found. There weren’t even any footprints leading from the place where she slept. Just a little indentation in the sand that still smells of her.

The raft is a problem.
I think it’s seaworthy, but Collin insists it’s not right yet. Needs more this, needs more that, needs to be more even. I told him he was being silly and he told me I was acting like Sasha.
What that’s supposed to mean, I have no idea.

I strangled Collin with the cord to my Norelco. He was going on and on about his preparations, so last night I set that goddamned perfectionist raft on fire. (Thank you, boy scouts!) He got all bent out of shape and came at me with a shard of aluminum siding from an overhead compartment. I talked him down, then, when he was picking through the ashes, I snuck up on him from behind.
Can’t have him building another raft.

No rain last night, just lots of lightning, which means no water today. Collin was in charge of storing the rainwater, and I forgot. Why can’t you drink salt water, anyway? The body can filter that stuff out, right? Isn’t that what your kidneys are for?

Another storm coming tonight.
I can feel it in my blood.

If I hold really still, I can hear the island speaking to me. That buzzing I heard? That’s its voice. I think the salt water makes it easier to hear.
I feel dizzy, but I’m afraid to sit down. The sand is moving like there are millions of snakes underneath it. But if I just stand right here and don’t move, it’ll be okay. The island told me so.

I am a teacher, runner, father, and husband. I am an author-in-progress. I know just enough about a lot of things to get me into a lot of trouble. END_OF_DOCUMENT_TOKEN_TO_BE_REPLACED
This entry was posted on Sunday, July 19th, 2015 at 6:58 AM and tagged with 1000 words, chuck wendig, dark, desert island story, horror, Science Fiction, sorta like Lost, weird and posted in Flash Fiction. You can follow any responses to this entry through the RSS 2.0 feed.
« The Weekly Re-Motivator: Another Year, Another Fear
Terrible Review: Jurassic World »