How do you measure a day?

For the longest time, I’ve been a Grinch about virtually every holiday. Christmas, Halloween, Thanksgiving, Valentine’s… you name it, I can give you a good reason to hate it.

Christmas? Over-commercialized. Flimsy reason for overspending and going into debt around the same time every year. Based loosely off some religious gobbledygook wrapped around a Russian mythology that bears virtually no resemblance to the fat man in the sled who apparently runs the show these days. Pure invention, for the sake of blackmailing kids into being good for a few months out of the year. Can it.

Halloween? If you feel the need to disguise yourself once a year, to let your “wild side” or whatever out of your system, you probably aren’t living your life right. If you’re an adult and you’re dressing up for a halloween party, you missed the memo that it’s time to grow up. If you’re a kid and your parent is driving you around to trick or treat, you’re doing it wrong… in my day we WALKED house to house. If you’re a teenager… get off my freakin’ lawn. Also, a poor excuse for making me buy a bunch of candy that I’m going to have to eat later.

Thanksgiving? Yeah, does the rest of the world need a signifier that we Americans take things to excess? So we have a holiday for the express purpose of eating ourselves into comas. Pass the gravy and the weird uncles, and I’ll be in the corner nibbling on cornbread until the in-laws are strangling each other over political issues.

Valentine’s? The canned argument is that if you need a specific day to show your special somebody that you love them, you’re doing it wrong. But I won’t even go there. I’ll fall back on the fact that this one is another one that’s pure invention, and who can stand all that red and pink? And, for that matter, the overnight megainflation of flower stock. Racketeering sanctioned by the people.

The list goes on, but you get the idea. I don’t go in for holidays or birthdays or any of that. My wife hates it, but I can’t help it. Any holiday is just a futile attempt to add significance to an otherwise insignificant day, a way to add punctuation to another year.

But our son is three this year. And our daughter is coming up on one.

And… dammit, everything is different. I find my Grinchly armor cracking at the seams, I feel the warmth of caring and celebration clawing its way into my cold, cold heart. Like… okay, this year was the first year he really cared about Christmas at all. In years past it was just a pile of toys that he got excited about for a few hours and then forgot about. But this year, he freaked out about Santa, and he jumped up and down on the morning of and he was talking about Santa Claus all day, and … god, it warmed my heart.

A chink in the armor.

Say what you want about religious connotations, but Easter is another holiday that’s had America’s grasping capitalist claws rending at it. The bunny, the chocolates, the eggs… honestly it sounds like one big acid trip if you ask me. Ridiculous. Ripe and ready for my scorn. And scorn it I have, and did this year, too… right up until about 11 AM this morning. 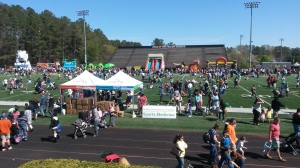 … and if you know my thoughts about holidays in general, it should come as no shock at all that I really don’t much care at all for being around crowds like this. People are at their worst in crowds. That herd mentality sets in, and all of a sudden you don’t have individuals making clear decisions on their own merits, you have a mob in the ragey throes of pack logic.

But today was Easter, and my mother had the great idea to take the sprouts to this big Easter Egg hunt, and, well, there we were. And there were moments — several of them — when I wanted to bail, to take my kids and get as far from this manufactured mass of pastels and candy as possible. But we went through with it.

And you know what?

The kids had a great time, and that’s all that fargoing mattered. Who cares if their grumpy dad was uncomfortable with the crowds, if he was inwardly sneering at all the colors and smiling faces? Who cares that the parking was a nightmare, or that my son wimped out on the bouncy slide we waited five minutes to get him on, or that the sno-cone we bought him cost two freaking dollars? (TWO DOLLARS. FOR ICE AND SUGAR WATER. It still hurts me.) He came back talking about doing more Easter hunts, and his face was illuminated with the joyous glow that I can only dream of having in my own cranky old disillusioned soul. I will never in my life feel the joy that permeated his being and exploded from his every pore at the simple happiness of the balloon handed to him at the tent operated by the local Plumbing group, except for the joy I can feel vicariously through him. I even grinned at the simple but pure greed of sprout #2, who was too young to know what was going on, but not too young to go back for one taste after another of the delicious purple ice I offered to her.

This is my wife’s fault. She’s known all along that there was more to these occasions than I ever allowed myself to believe, and she staunchly held her ground against my protestations that we shouldn’t bother celebrating any of them all these years. As is so often the case, she gets to have the last laugh now.

It was a day I should’ve hated, but it was the best Easter I’ve ever had. And there must be something seriously wrong with me, because I’m thinking it wouldn’t be a terrible idea to do it again next year.