An Idea is Born

The stream of consciousness prompt this week is “scene/seen”, and that feels like kismet. Because if you’ve spent any time around my blarg, you know that one of the things that’s been front-of-mind for me over the last year or so is my novel. And I think so much about what the novel is and what it may yet be that it’s easy to forget what it once was, which was a dumb little scene I wrote for a playwriting class I took in my fourth year at UGA. I say dumb not because I thought that scene was bad (though if I read it again I might have to reconsider that assessment), but because I wrote it almost as a throwaway. We’d been in the class for maybe three weeks, were still learning the ropes, and this assignment was an easy one to get us thinking outside of the box a bit.

“Have a character enter your scene from somewhere unexpected.”

Were you to give me that prompt now, I’d have a hard time deciding which outlandish entrance to use. I’d have somebody come crashing through the window or the ceiling. I’d have an escaped prisoner tunnel up through somebody’s living room floor. I’d have a reincarnated Elvis enter from the bathroom in a cloud of psychedelic lights and smoke. (Okay, so I stole that Elvis entrance from Steve Martin’s Picasso at the Lapin Agile). The problem would not be “how do I write this scene,” the problem would be “how do I choose?”

But at the time, the prompt stymied me. It wasn’t that I couldn’t think of strange entrances — I could — but I couldn’t think of a way to justify any of them. The idea would strike, but I wouldn’t know how to connect it to anything meaningful. Even as I write that, I find myself shaking my head — it was just an exercise scene, it didn’t have to connect to anything meaningful! — but I was stuck. Stuck, stuck, stuck. I sat in front of my computer staring at a blank page for the better part of an hour, unable to write this scene, too nervous to take a chance. 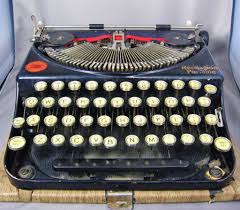 The one piece of writing advice that everybody knows is to write what you know. Frustrated with the assignment and my inability to pen even a single word, I fell back on that old axiom. I’m blocked? Can’t crack this scene? Fargo it. And I wrote my character, a frazzled, frustrated guy, sitting white-knuckled and scruff-faced obstinately in front of a typewriter. (Yeah, yeah, I know, I have a thing about typewriters.) I had him struggle and hem and haw and make excuses and bang his head against the wall, and then, finally, he just gave up trying to be creative and wrote a crappy, cliched little scene. Nothing special about it. Except that it appeared out of nowhere (the unexpected entrance, such as it was) and played out right in front of him. Taken aback at first, he spoke to the characters that suddenly existed right there in his crappy apartment. The newly created characters shared their thoughts (this setting sucks! I would never read that book! Why would I even say that to her?), he took their advice, and in a matter of moments he had figured out that the best way to write was to get the fargo out of the way and allow the characters to explore their own situation.

I thought it was crap. I mean, really, I was almost ashamed of it. So ashamed that I almost didn’t go to class the next day. But crappy though it was, I had enjoyed the taste of writing it, so I went. Naturally, the teacher (the inimitable Stanley Longman) called on me as one of the first to present. With sheepish disclaimers, I handed copies of the scene to three of my classmates, who took a few minutes to read over it before assuming positions on the stage. I heard them giggling as they ran through it and thought, great, it’s as terrible as I feared and now I’m going to be exposed for a hack. Then they read the scene, and the laughter continued; little snickers here and there, even a stray guffaw. Finished, the actors took their seats and I sat on the feedback stool, red-faced in front of everybody, and waited to be verbally crucified.

First hand raised, I called on a girl whose name I didn’t know at the front of the room. I’m paraphrasing, of course: “First of all, it was really funny. I loved the interplay between what we expected from his characters and what they really wanted for themselves.” Nods from around the room. Next up, a guy who sat near me and whom I’d collaborated with on an earlier exercise. “I recognize that struggle when I write,” he said, “it was cool to actually see it on stage. And it worked.”

The workshop continued. I got critical feedback as well as praise. But my professor’s comment stuck with me more than any of the rest. He scratched his head and spread his hands like a big grandfather gorilla. “The concept needs a little work, just to polish up the how-is-all-this-happening, and the why. An audience wants that. But it’s funny, you’ve nailed that. Those comedic elements are the hardest to pin down, and you’ve done it. Don’t you think?” He inclined his head past me toward the class, and there were vigorous nods of assent. He chuckled. “I loved it.”

That class was my favorite experience in my undergraduate years. Much though I loved that class, I got distracted from that scene and didn’t think about it for a few years. When I graduated and moved back home, I had the opportunity to work with my old high school and ended up taking the core concept of that scene — an author at war with his characters — and expanding it into a full length production. It went over like gangbusters, and, shock of all shocks, it played a role in my meeting with my wife (her mother saw the show, knew me from my work with a community theatre, and kinda-sorta shoved her in my direction).

Now, eight years later, that stage play is becoming a novel. And I feel the same fears in its formation that I felt in those days struggling with that seedling of a scene: that it’s contrived, that it won’t be funny, that it’s ultimately utter crap. But somehow, this time around, I’m not nearly so fearful as I was. Maybe it’s that I’m older and jaded and I don’t care what people think like I used to. Maybe it’s because I’m more confident now than I was then in the concept and my ability. Maybe it’s because I’m older and losing touch with reality and don’t know well enough to be properly nervous. Whatever the reason, it’s a nice reminder to myself that I’ve had success with this story once, and there’s no reason why it couldn’t happen again.

I am a teacher, runner, father, and husband. I am an author-in-progress. I know just enough about a lot of things to get me into a lot of trouble. END_OF_DOCUMENT_TOKEN_TO_BE_REPLACED
This entry was posted on Saturday, January 31st, 2015 at 9:11 AM and tagged with inspiration, stream of consciousness, stream of consciousness saturday, typewriters, where do ideas come from, writer's block, Writing, writing classes, writing workshop and posted in Ramble, Writing. You can follow any responses to this entry through the RSS 2.0 feed.
« Just Junk
The Crater Devil »

7 responses to “An Idea is Born”