Inadvertent Mud Run (or, Why It’s Nice to Get Your Shoes Dirty Now and Then)

Is there a sillier form of entertainment than shelling out hard-earned money to get up at the asgard-crack of dawn and slog it through the elements with three hundred people I don’t know?  I don’t know.

Yesterday marked the first race I’ve run since October, which is a shame for me, because I love races, even though they are dumb.  Seriously, races of any sort are the antithesis of everything I profess to love about running:

So racing goes against everything I love about running, but I love races.  I love the uplifting, positive vibe that everybody brings to a race.  I love the bustle of energy and excitement at the starting line.  I love the competitive edge to it, the way I can motivate myself to push just a little bit faster so that that guy in the blue shirt doesn’t just leave me in the dust.

Unfortunately, due to a variety of circumstances, I hadn’t run a race in months.  Partially because, well, life happens and it’s hard to make the time for it.  Partially because it costs extra money, which is a thing I’m dreadfully short of of late.  (Repeticons ftw!)  Partially because my feet have been jacked up, one way or another, since January.  Then, as a sort of early father’s day present, my wife noticed that a local race was about to happen again and suggested I run it.  Well, you don’t have to ask me twice.

The Blake Gammill Run is a lovely little event sponsored by my local running club, Douglas County Rogue Runners, and benefiting the local Sheriff’s department.  They have it every year at a local park, and it’s a cracking good time, with multiple events, a nice t-shirt, and a more-than-reasonable entry fee.  If you’re in the Atlanta area, it’s worth checking out — it’ll roll around again next June.

However, a small disclaimer would not have gone amiss.  Nowhere on the literature was anything said about the run being a Mud Run.  A run through the trails in the park was advertised.  Ponds and streams.  To the race directors’ credit, I suppose it is impossible that they could have foreseen the three inches of rain that fell on the course the day before the run.  The ponds were the low points on the trail.  The streams were the rivulets on the hills.  Both were numerous, and deep.

I opted to run in the second race of the morning — the 10.5k (nowhere else have I seen a race with a distance of 10.5k, it’s quirky) — and I should have known something was up when the first finishers of the 5k arrived back at the start line looking like Andy Dufresne at the end of Shawshank after he crawls through the oft-quoted river of sharknado.  Surely, I thought, these strapping youngsters were only so mud-splattered because they were running so fast they couldn’t dodge the mud.  Won’t be a problem for me.  I had no designs on setting record times.

Then my race started, and in the first quarter mile, just before the trail steals off into the trees, there’s an enormous, insurmountable, unavoidable mudhole completely blocking the entrance of the trail and swallowing up the bases of a few bordering trees for good measure.  We tried skirting it and leaping it but in the end, everybody started the run off with mud and nasty water in their shoes, and it was six miles of the same ahead of us.

Nothing against a little mud, but I’m a road runner.  I hit a trail maybe once in thirty runs (though I’m always saying I’m going to do more), so mud just isn’t a thing that’s on my radar.  Bit of dirt on a cut-through, sure.  Mudholes in the lot behind the tire shop, yeah, I can dance around those.  But out there, on those winding dirt paths, that’s serious mud.  Like, open a beauty spa out here and charge wagons of cash to lay down on the road.

Within the first mile, I’ve got the blood of the forest covering me from the knees down.  I’m slipping and sliding and fighting to keep my feet; like a toddler running across an ice rink.  Watching the runners around me and in front of me, I keep seeing arms flying up and waists darting sideways for balance, like there’s some big horribly choreographed dance that I wasn’t aware of set to an inaudible soundtrack.  It’s bizarre, it’s surreal, it’s scary at some points (I was flying down what felt like a 30% grade at one point with a huge mudhole at the bottom, just trying not to think about the multitude of ways it could end badly for me).

It’s also some of the most fun I’ve ever had running.  I’d liken it to swimming during a rainstorm — you’re already soaked, so why bother getting out because more water is going to fall on you?  After the first mudhole, all of us were a big sloppy mess, why fight it or worry about how much dirtier you’re going to get at that point?  And once that simple truth sunk in, it became possible to embrace the childlike joy of playing in the mud — aiming for the deepest part of the puddles to see how much nasty water I can splash everywhere, looking behind me to see my craterous footprints in the soft, squishy muck, laughing like a breathless lunatic when a runner passed me with a big blotches of mud all over his face and neck.  It was stupid and disgusting and simply a balls-out good time.

For years I’ve been thinking of signing up for one of those Mud Runs which are designed to get you filthy nasty by the end of the trip.  Now that I’ve run this race, I definitely want to find one.  If you can get this dirty by accident, how much more can you achieve when that’s your stated goal?  Anyway, what I’m saying is, don’t fear the mud.  Kids love playing in it for a reason. There’s no reason an adult can’t get a piece of that every now and then. 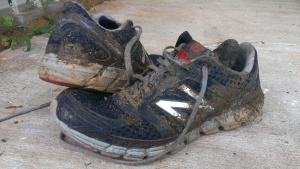 I am a teacher, runner, father, and husband. I am an author-in-progress. I know just enough about a lot of things to get me into a lot of trouble. END_OF_DOCUMENT_TOKEN_TO_BE_REPLACED
This entry was posted on Monday, June 16th, 2014 at 6:55 AM and tagged with 10k, mud run, playing like a kid, racing, running, trail race and posted in Running. You can follow any responses to this entry through the RSS 2.0 feed.
« Gin Rickey
Somebody Greased the Wheels »