On Bloody Ears and the Problem of Luck

I cut myself shaving this morning.

Not a big deal. I wasn’t the only one. And it’s not like it has messed with my day in any major way. You get a cut, you stop it up with some tissue paper, you forget about it and walk into the office with spritzes of bloody tissue on your face, life goes on.

Except I didn’t cut my face, as one might expect. I cut my ear.

And not the low-hanging fruit of the lobe, which, while unusual, is still within the realm of the normal and understandable. No, I sliced the top of my ear. 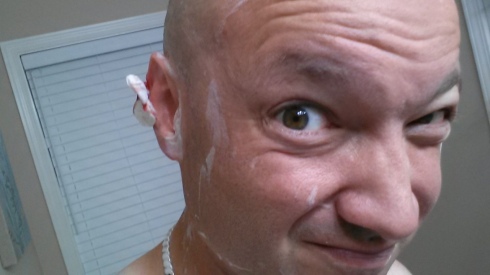 This is virtually impossible to do under ordinary circumstances, unless, like me, you’re a guy taking a safety razor to your dome once a week.

(Side note: the safety razor is not particularly aptly named, as it turns out. Your average dollar-store special is way harder to injure yourself with — though it doesn’t give you nearly as nice a result.)

Worse still, I’ve done it before — and it’s the kind of mistake that, really, you shouldn’t make that often. Cuts that high up on the head sting terrifically, and bleed with the abandon of a five-year-old running toward a playground, which is to say, total. One would think that one would, therefore, remember the unpleasantness of the entire affair and take care to avoid it.

The trouble is, of course, that shaving is one of those things that becomes routine, that you do so regularly that they become automatic. And when things become automatic, our minds tend to wander while we’re about them. (See also: driving. Unless something seriously significant happened — a near accident, for example, or a strange sighting, like a murder-clown walking along the street side — what can you really remember about your drive this morning? Probably not much. Your brain handled it for you, on autopilot, while you listened to the radio or thought about what you had to get done today.) And when the mind wanders while you’re about a routine task, well. You can come away missing pieces of yourself.

This is called automaticity, by the way, and is one of the few concepts I recall with perfect clarity from my college days. Who knows why. Probably it’s the funny word, which WordPress’s spellchecker does not recognize.

But shaving is not a thing that I should be doing in such a carefree manner. The blade I’m using is sharp, and the technique for its use is not necessarily intuitive. Not to mention that the curved surface of a skull is not the easiest thing to shave when using a blade that is flat. There’s care involved, and skill, and attention to detail. And getting above and behind the ears is fiddly even by head-shaving standards. I really should know better.

But no, instead of focusing on the task, I was listening to a podcast. Trying to learn a few things about the world we live in. (A back episode of The Skeptic’s Guide to the Universe, for the curious.) You know, trying to better myself. And then, snag, slice, recoil.

And here I am, bleeding. I thought it might not be that bad, until a few seconds later when blood began dripping onto the bathroom counter. (Pit pit pit. Cue dizzy panic.)

There’s something to be thought, here, about luck. I was unlucky this morning, but this is my MO every time I shave, and usually I am not unlucky. (To put it into perspective, consider: many, many people text and drive, some of them alarmingly often. Some unlucky few will get into accidents, or even hurt or kill somebody, as a result. Only those disastrously unlucky enough to have accidents happen are likely to suffer any significant penalty or jail time; most people who text and drive suffer no consequence at all. Yet they all participated in the same inadvisable behavior. Some are lucky, the others are not. Shouldn’t those who text and drive, even without causing any harm to anybody on the occasion, suffer the same penalties we would levy against the person unlucky enough to hit somebody with their car? Why should those who were simply unlucky bear a harsher penalty? Needless to say, this is a practice I do not partake in.)

Anyway, just some food for thought on a Monday morning. Maybe I need a bit more mindfulness in my day. I’ve got a bloody neck and shoulder to remind me. It leads me to wonder: just how much of our days do we complete on autopilot?

I am a teacher, runner, father, and husband. I am an author-in-progress. I know just enough about a lot of things to get me into a lot of trouble. END_OF_DOCUMENT_TOKEN_TO_BE_REPLACED
This entry was posted on Monday, August 6th, 2018 at 8:11 AM and tagged with attention to detail, automaticity, focus, funny, mindfulness, monday morning, moral luck, safety razors, shaving injuries, waxing philosophic and posted in Accidental Philosophy, Ramble. You can follow any responses to this entry through the RSS 2.0 feed.
« It’s Still There
Accidental Philosophy: The Futility of “Should” »