Sunburned Eggs (or, Atheists at Easter)

My son and I were in the toy aisle at Wal-Mart today.

Sprout: Well (he prefaces all his profundities with “well”), magic tricks are real, but real magic isn’t real.

Me: (the militant skeptic, hoping that this, right here, standing in the toy aisle, is the end of Santa Claus and the Easter Bunny and the Tooth Fairy and all manner of insufferable BS that parents pretend at for the “benefit” of their kids, but not wanting to come on too strong) oh, really?

Sprout: Yeah. Nobody has real magic.

Me: I see. Well — do you think the Easter Bunny is magic?

Sprout: Well, he only brings eggs filled with candy. That’s not magic.

So, you know. His skeptical instincts are apparently well-formed but still developing.

None of which kept me (a staunch atheist) and my wife (a wobbly atheist) from taking the kids to a local church for an Easter Egg Hunt (what gets capitalized there, really? Easter is the holiday, but Easter Eggs are specific things, and Hunts for Easter Eggs are certainly specific things too, though eggs and hunts are not typically specific things, and sometimes I hate the the fact that I taught English). This was not a purely cynical exercise, mind you. We were invited by one of my wife’s co-workers who, I think, thinks she can “snap us out of it.” And because we apparently think these kinds of things are good for the kids to take part in — as a cultural phenomenon, if not as a religious one — we went.

At said hunt, the organizers were dropping eggs from a helicopter, which is a thing that’s become more of a thing in recent years at your bigger Easter events. Of course, this is all flash without substance — it doesn’t change the intrinsic sugar-frenzy of the kids scrambling to get all the eggs before their peers, it just hypes them up and instills a good, solid bloodlust beforehand. But at this particular event (which was the first helo-drop), all the bugs had not yet been ironed out. So the helicopter circled the field once or twice, with the anticipation building, landed nearby to collect the eggs, then descended and dropped (apparently) thousands of eggs in a single spot on the field.

Thanks to all the rigmarole with the helicopter, the waiting for the “hunt” to begin (and the field in question was a literal soccer field, so it was less “hunt” and more “frenzied Thunderdome for all the clearly visible eggs in the grass”) took over an hour. Which resulted in a lot of cranky toddlers, frustrated parents, and at least one seriously sunburned bald atheist.

Which left my wife and I wondering why we went through it all.

Of course, the kids had a ball. 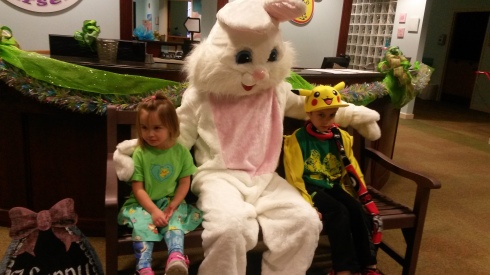 I want you to note how really, thoroughly, unimpressed my kids are by all this.

So I guess there’s that.

I am a teacher, runner, father, and husband. I am an author-in-progress. I know just enough about a lot of things to get me into a lot of trouble. END_OF_DOCUMENT_TOKEN_TO_BE_REPLACED
This entry was posted on Saturday, March 31st, 2018 at 11:03 PM and tagged with atheists at easter, easter bunny, funny, humor, rant, skepticism, stream of consciousness and posted in atheism, Ramble. You can follow any responses to this entry through the RSS 2.0 feed.
« Bullet Journaling Is Not Journaling
Vocabulation »

2 responses to “Sunburned Eggs (or, Atheists at Easter)”