Guest post today, which means — rarity of rarities! — we actually have Metaphor Monday on Monday!

Make sure you double back to Glenavailable’s Scenic Writer’s Shack once you’re done here.

Jellyfish evaporate in the sun.

So do ideas if you don’t write them down.

That’s why for a large number of years I’ve kept a series of what I ambitiously refer to as ‘writer’s notebooks’ Those saddle-stitch bound, dog-eared ones from three decades past are long gone now of course, but I still have in my possession two dating back to the early 2000’s. Both spiral-bound, one sporting a bubblegum pink cover the other aqua-marine, together they’re overflowing with what might best be labelled ‘fragments’.

These fragments include overheard snippets of dialogue from real life, television and movies, lists of unusual people and place names, beginnings or middles of ideas for stories, life quotes, mixed metaphors, creative insults, lifted descriptive passages from news articles and novels, jokes, self-deprecating remarks, even a couple of useful phrases to pull off a 1980’s era Arnold Schwarzenegger impersonation (” I got my uzi-nine millimetre!”). And all of it written in a penmanship so poor much of it is bordering on illegible.

I was leafing thru ‘aquamarine’ just the other day.

In it I found the aforementioned assorted bric-a-brac wordery, including obituary type notes for the late English actor Dudley Moore (1935 – 2002). My scribble included the date he passed away (which, checking now, I realize I had gotten wrong), the fact he was only five feet two inches tall and the description of him as a sex ‘thimble’. Clearly at the time I regarded this quip as worthy of recording but up until this moment I’ve never found the opportunity to repeat it.

On other occasions however I’ve had cause to be thankful only a relatively short time down the track from the original transcribing that I made the effort to jot down, often in the dark while watching a television screen, of some overheard one-of-a-kind wisecrack or pearly good utterance.

The 29 acre island of Little Ross (complete with lighthouse) located off the southern coast of Scotland.

One relatively recent example of this occurred while viewing the despair-ridden and blood-splattered nightly bulletin known as the six ‘o clock news. On came one of those lighter human interest stories they insert to dilute the ‘stiff whiskey’ of the other stuff. Mention was made of a remote island lighthouse near Scotland called Little Ross that was up for sale. Highlighted was the tragic backstory of the lighthouse which included the murder of a previous lighthouse keeper back in 1960.

A summary of this news snippet made it into my most prized black-speckled notebook. This in turn launched an on-a-whim research splurge conducted on-line and amongst the shelves of my local library which culminated in the writing of a short story about two lighthouse keepers who drive each other to distraction due to the late-evening piano playing habits of one of them. And in direct homage to the bits ‘n pieces power of the writer’s notebook, this story then went on to appear in a November issue of the digital literary magazine RUMBLEFISH PRESS.

I have another notebook (apricot orange with horizontal white stripes and multicoloured section dividers) I use to record names. Unusual names. Names of distinction. Class names. So when Sloane Stephens mercilessly crushed Madison Keys in the U.S Open Women’s tennis final back in September… notebook time!

Only last night I was looking at a documentary on the making of 1949 British film noir THE THIRD MAN. In it they mentioned the sewer police featured in the chase scenes filmed amidst Vienna’s underground canal system were not hired actors but real-life lawmen whose ‘beat’ was the subterranean depths of the below-the-city waterways. The words ‘sewer police’ struck me as  unusual enough to warrant recording, so once again … notebook time! (The black speckled one).

Might ‘sewer police’ make it into a piece of writing I embark upon in the near or distant future? Who knows? And that’s part of the mystery and charm of writer’s notebooks. You can never be certain if there’ll be any future use for the snippet you’ve thought worth preserving. But similar to playing the stock market, naturally you live in hope your investment will pay a nice dividend somewhere down the track.

Writer’s notebooks that are intended on capturing and recording random ear and mind candy comprising everything from flavoured phrases and witticisms to funny, touching and dramatic dialogue and quotable quotes (“Cometh the hour, cometh the man” came from a viewing of the 2016  Catherine Zeta Jones-starring DAD’S ARMY last week and it’s extremely tempting to remark that line was one of the few highlights of the entire movie) are at the very least a way of clocking in. They’re also a way of furthering one’s lifelong love affair with words and can always be surfed later for inspiration. 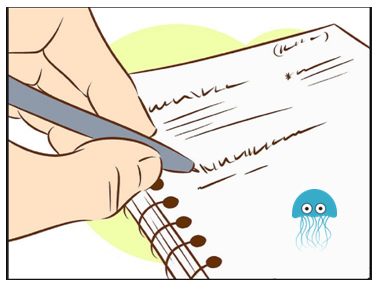