Lose Yourself on the Trails

I’m a creature of habit and routine. (As are we all.) The only way things work in my life is if they find a way to fit into the routine. That goes for writing, obviously (which is one reason I haven’t written much lately: because the school year is almost out and that’s basically like tax time for an accountant). But it’s true for running, too.

Any exercise routine needs … well, it needs routine if it’s going to work. You can’t just squeeze it in when you get the chance, because who ever really feels like running three miles just because? (Well, aside from lunatic runners like myself.) The routine is what keeps you honest on a day like today, when I shut off my alarm and laid my head back down instead of getting up to go run, and then 15 minutes later the guilt took over and I suited up for a couple of miles anyway. And my routine works because it’s simple and accessible: I just step out the front door and go. If it wasn’t that easy, I wouldn’t be a runner.

And I live in the suburbs, so the runs are routine, too, even if I change up my route. There’s no danger of getting lost. No chance I’ll be unable to find my way back. When you’re in town, even one that isn’t familiar to you, there are landmarks everywhere marking the safe path. Buildings. Street signs. Rusted out shopping carts in the ditch. You can see these things and construct the path that brings you back.

Which is awesome, but let’s agree, pretty boring, too.

Which is why every runner should take it to the trails every once in a while. 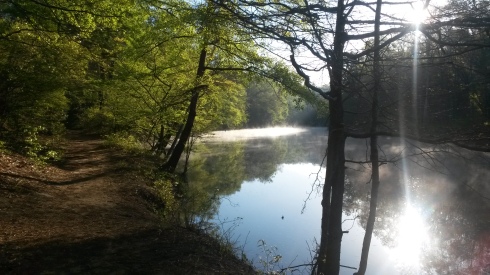 I could go on about the physiological benefits to running on trails (dirt is softer, ergo easier on the legs and feet; the uneven surfaces force you to recruit more stabilizing muscles and result in a better workout; the roots and rocks in your path force you to be present and focused on what you’re doing), but that’s not why I like trails.

I could also extrapolate on the mental benefits of the trail (studies show that proximity to nature confers clearer thinking and reduced stress levels; the smog is replaced with the flowery, earthy scent of nature; and let’s not underestimate the value of not having to dodge traffic), and those are great, but they’re not my favorite thing about trails.

I like trails because you could get lost out there. Even on the well-cultivated, clear-cut trails at the parks and preserves near my house, there are side trails and detours and twists and turns not marked on any map that, were you to ignore good sense and plunge in unprepared, could turn your one-hour excursion into a two-hour one, at the very least, or a three-day-weekend surprise-camping-trip at worst. Landmarks are few and far between if they exist at all. What you’re left with is a boundless sea of green all around with a tiny ribbon of dirt that swerves off into the thicket. Not much way of telling where you’re going, nor of telling where you’ve been. One tree looks much like another, and when the canopy grows together over the top of the trail (as it does on most of the trails I frequent), you don’t even have the sun to help you navigate.

You’re lost, except for the blind trust that you’ve read the map correctly (which, let’s be honest, you probably haven’t). 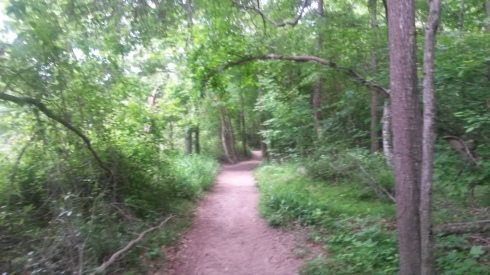 And this is the best part! Because this is when you realize that for all that humanity has tamed the world and the wilderness, there are still great stretches of it everywhere, just waiting to swallow you up. Which is — wait for it — just like writing.

You start your project with an idea. Maybe you map it out deliberately and painstakingly, or maybe you just jump in and start writing. One way or another, you take those first steps off the well-cultivated road and pretty soon it’s nothing but identical trees in every direction but for the tiny scrap of trail disappearing behind you and stretching off into more trees ahead. And your cultured, educated brain tells you that it’s not so far ahead that the trail should jerk hard back around to the right — the way back to civilization — but all of a sudden the path dips and bends off to the left.

Was that the way? Or are the woods playing tricks on you? Suddenly you’re filled with uncertainty, and you think you’re heading in the right direction, but all you really have is your hope. That, and the tiny bit of story you just wrote and the tiny bit you can see from where you stand. Every now and then you break through — the canopy parts and you can see for a stretch down the river or across the valley — but in moments, it’s all swallowed up again in the green maw of the forest.

As runners, I think we have to leave behind what we know and go get lost every once in a while. Partly for the benefits it confers, but mostly because running is one of the few sports that encourages us to enter and explore the world all around us in its natural state.

And as writers … well, I think as writers we should maybe spend more time lost than found.

I am a teacher, runner, father, and husband. I am an author-in-progress. I know just enough about a lot of things to get me into a lot of trouble. END_OF_DOCUMENT_TOKEN_TO_BE_REPLACED
This entry was posted on Wednesday, May 11th, 2016 at 1:41 PM and tagged with Dubious Advice, getting outdoors, running for writers, running is awesome, running trails, trail running, trail running psychological benefits, writing about writing, writing for runners and posted in Running, Writing. You can follow any responses to this entry through the RSS 2.0 feed.
« Is Marvel Bloat Reaching Critical Mass?
The Power of “If” »