I’ve kvelled for most of the summer about my difficulties with my current writing project. Those difficulties are made all the worse by the fact that I’ve been languishing in the mushy middle of the book; that part where the beginning has happened and ended, and we’re working toward an ending that will take up the last quarter of the book. Meanwhile, however, things seem not to be happening with much urgency or importance. I mean, parts are moving that have to move, but much like a sailboat in the middle of the Pacific, there’s some drift happening, and it’s hard to be sure moment-to-moment whether it’s good drift or bad drift. There’s nothing but deep blue sea out here. It all looks the same.

This, to be sure, is where my general go-to strategy for writing hits the wall like a midget riding a crazed pygmy bull. I’m a pantser, not a plotter, because I just can’t be bothered to make outlines. I tell myself and people who ask me (woe betide them) it’s because I write organically, whatever the fargo that means. In my head, it means that I craft the characters and the general situation and sort of “listen” to the characters as they “feel” their way through the situation and find their way through it. In practice, that means I’m basically making it up as I go along. The problem there is that Rome doesn’t get built in a day, and a novel is not written in a week. I’ve been working now for about three, four months on this project, head down, churning out the word count like a good penmonkey, but each day it’s the same. I know generally what has to happen next, I write it, I leave some notes to myself about tomorrow, I repeat. Which is fine for making my word count goals, but maybe not so fine for the story as a whole. 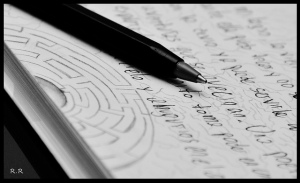 Because there’s nobody really steering the ship. It’s impossible to have the oversight I need to make sure the project is on track while also pushing out about 1000 words a day on this thing. All I can really do is watch the road directly in front of me and make sure I’m not driving into the ditch.

But that’s a problem, because I’m missing the road signs along the way, I’m missing landmarks, I’m not getting much feel for the arc of the story as a whole. I know where it needs to go generally, but it’s been a long time since I bothered to check the map and see whether I’m on course.

And what’s a map to a writer? Unfortunately for pantsers like me, it’s an outline.

And for a month now, I’ve felt that the narrative is adrift, that I don’t know where I’m going, that I’m getting a little lost. Time for a map check.

So tonight, instead of sitting down to pound out 1000 words of narrative, I resolved to do some outlining. I skimmed through what I’ve written so far and summed up the main points of each chapter. Which taught me that, some boring exposition aside, a few less-than-meaningful interactions aside, a few unnecessary characters who will be pruned in future drafts aside, the narrative actually clips along pretty well. Once I get the thing sanded down, it’s gonna hum, baby. Outlining also taught me that I’ve forgotten several details — even some key and important things I planted early in the draft which need to play major roles in the end of the book. They’d just slipped my mind, which is not surprising, because drafting a full-length novel and making it up as you go along is a little bit like juggling the entire contents of your kitchen at once, and then somebody hands you a baby.

So, with outline of everything I’ve written in hand, I’m ready for tomorrow’s session, which is going to be roughly outlining the back half of the book. It won’t be even a quarter as detailed as the outline of what I’ve already written, but what it will do is tell me the plot points I need to steer for when I get adrift again in the coming months of drafting. I’ve already seen, just from retracing my steps over the past couple chapters, what I need to do with the next three or four chapters. Which makes going back to work on the draft that much easier, because I don’t have to make it all up on the spot. I don’t have to find my way across the Pacific just by glancing at the night sky.

I’m here to tell you that I felt silly spending an hour and a half writing out an outline for a book I’ve already written half of. It’s going to be arduous work completing the outline for the prospective ending, especially knowing (as I already do) that that ending will change in some way, shape, or form by the end. But I’m also here to tell you that I see more clearly than I have in months the path that the book has been on and the path it needs to take. Foreign as it felt, the outline has reinvigorated me at a time when I desperately needed it.

So, my advice to my future self is: