The wife and kids have been out of town for almost a week, and daddy has been able to get a lot of things done. Lots of writing (on the novel, if not so much around here), lots of things around the house (knocking a few things off the ol’ honey-do), lots of things I don’t normally get the chance to do.

Living in suburbia and working a more-or-less typical 9-to-5 schedule, then coming home and being a daddy, I don’t have a lot of time to get away. I love running for its simple step-out-the-front-door-and-go nature, but of course, stepping out the front door gets me to only a limited number of possible routes I can run. There’s the mall loop, which I’ve completed more times than even bear counting. There’s a slightly longer circuit that takes me around the local strip malls. Then, on the weekend, I stretch that loop out and roll through downtown, over to the train tracks and past a bunch of mom n’ pop businesses over closer to the railroad tracks.

But I’ve run all of those routes dozens, if not hundreds of times. My feet practically slide into their own custom-made grooves in the pavement. Not much adventure there, outside of dodging the traffic, of course. So the chance to switch things up without having to hurry home for my daddy responsibilities is too tempting to pass up.

We have some good parks and good trails around here, and I’ve run several of them during races and the occasional weekend sneak away, but not nearly regularly enough. There’s nothing quite like trading in your roadside stomps for covered bridges… 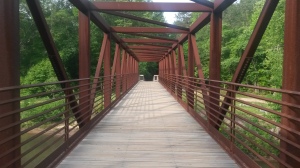 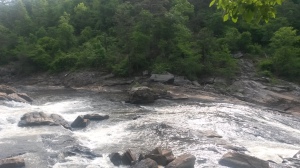 And enough greenery to make you feel like hugging a tree, or maybe eating one: 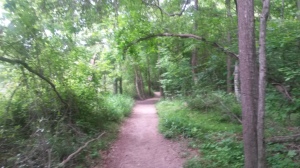 So I’ve set off for a few of them over the past few days. And I’ve learned a few things.

First of all, trails are hellish and heavenly on your feet. Hellish because you hit all kinds of rocks and roots and bumps and sudden drops and hidden steps and any number of obstacles that you don’t hit on the roads. I’m embracing my minimalist shoes again when my feet feel fit (which has been a lot, lately), so I really feel all the bumps in the road. The trails are leaving me with hot spots in my feet — not pain, but soreness and tenderness — which is actually rather a good feeling despite the discomfort. Like a scar after a knife fight, sort of a badge of pride, a proof that I was there and I went through something. Then again, the trails are heavenly, because there’s none of that non-compactable asphalt or concrete underfoot. It’s all dirt or grass or a lush, springy bed of fallen pine needles and leaves pillowing my feet along, like the fingers of angels ferrying me to happiness. Sweet and sour.

Second of all, and more importantly: with trails, you have to know what you’re doing. I checked out maps beforehand and figured I knew pretty much what I was looking out for — the trail goes in such and such general direction for about a half mile, then follows the river for a bit, then cuts back inland toward the rocks shaped like a couple of donkeys humping — but the problem is, when you’re out there surrounded by nothing but green, one donkey hump rock looks pretty much like another, and judging distance is about as easy as cross stitching blindfolded. (Is that hard? It sounds hard.)

Long story short, I got lost. Day 1 I got a little lost and increased my estimated distance by about a half mile, running 3.7 when I meant for a little 5k. That’s no big deal. Saturday, though, I was aiming for 4 miles and ended up running almost six. Which is fine if I’m in shape, which I’m not, because I’ve been nursing my plantar-fasciitis beset right foot back to health. Not only did I increase my mileage spontaneously, but I did it over some of the toughest terrain around: the riverside trails of Sweetwater Creek State Park. Now, there’s beautiful scenery to be seen, and in fact, you’ve probably seen some of the terrain I was running on… 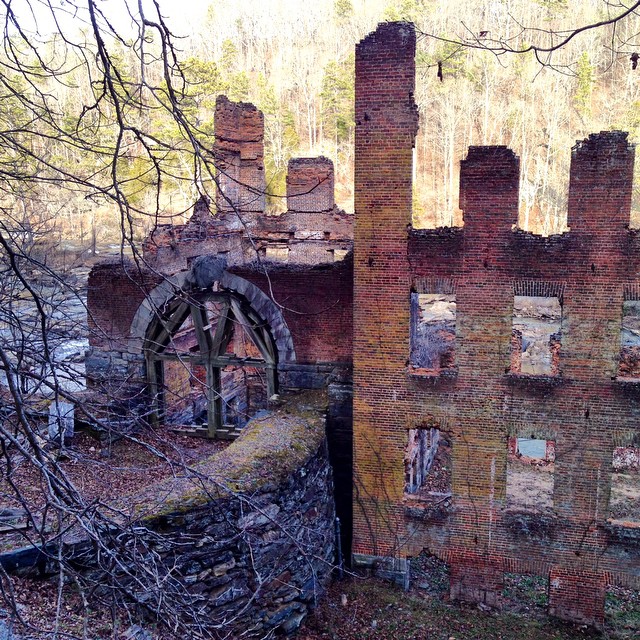 That’s the New Manchester Mill Ruins, and Katniss and what’s-his-beak make an appearance there when they’re in District 13 in Mockingjay, Part 1. (Let’s not talk about the nonsense of splitting any of the books in that series into two movies. Let’s just not.) The trails at Sweetwater go past this relic and up and down some sheer rock faces as they follow Sweetwater Creek past rapids and on into lonely meandering stretches of the river. Really, really gorgeous area.

And I got so lost. My first warning sign was these stairs: 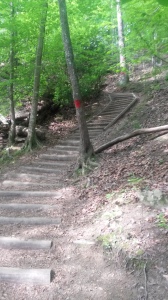 It’s hard to get a sense of scale, but I’m pretty sure those stairs are equivalent to a seventeen-story building.

I had just gotten finished climbing what felt like a 30 degree incline for about a quarter mile up — so steep and so long I was literally pushing my knees down with my hands to keep going — when I realized I had absolutely no idea where I was or which way was back. Luckily, about that time, a guy and his dog (seriously) came running through a field of brilliant sunny daffodils. He and his pup are regulars, and he was able to point me back to relative civilization: “Oh, just go that way for about two miles, and you’ll see the signs guiding you back in.” This, when I was already at the 4 mile mark for my 3-and-a-half-mile run.

Well, not to belabor the point, but I did make it back. My feet were trashed from six miles in my minimal shoes and I was sweating like the traditional whore in church, but man, there’s something to be said for the journey. I ran almost six miles and did some serious hiking for at least an additional mile in there, and it was simultaneously the toughest workout and most rewarding and enjoyable running experience I’ve had, maybe since I ran my first half marathon. Just pure fun and happiness, despite how beat-up I was afterward. I’ve heard the term “runventure” before, and I always thought it was a little dumb and ridiculous, but this particular run, I think, qualifies.

Anyway. Point is, if you’re going to go running a trail — especially if you don’t usually go running trails — maybe bring a map.