The future is here.

I remember playing video games as a kid (okay, who am I kidding; I remember playing them as recently as last week) and in just about every game, especially in the height of the Nintendo era, there was a hierarchy of weaponry. Peashooter, rapid-fire peashooter, short-range death-spraying flamethrower, some mystical weapon that sprayed bullets in a ninety-degree arc from the barrel of the gun somehow, and then at the top of the pile was the frickin’ laser beam.

This was before rocket launchers or sniper rifles could be realistically worked into games (because you know, the laser beams and spreader guns were totally realistic) and became the top of the heap like they are today. The laser beam was king. As soon as you got the laser beam you essentially became death incarnate, indiscriminately spewing fiery destruction in whatever direction you chose, melting the faces off any hapless henchman unfortunate enough to wander into your general vicinity. The holder of the laser beam could stroll to victory over a veritable heap of enemies’ corpses, charred to a smoldering crisp. Never mind whether the weapon was believable or not — I always went for the weapon, not simply because it laid waste to the enemy with effortless indifference, but because it was so much fun, not just to wield, but also to say. LASERS. Some games spelled it with a “Z”, which was even more aweZome. LAZER GUNS, pew pew!

And, of course, there was Star Wars. Oh, the Star Wars! Star Wars did for Laser guns what… well, what Star Wars did for the lightsaber, for that matter. The awesomeness of wielding a one-handed laser blaster was matched only by deflecting said laser blasts with a deft lightsaber dance. (God, I don’t know if my children will ever be able to understand how awesome it was having serious video games and unbelievable special effects for the first time literally ever.) And part of the magic of these impossible weapons was that they were just that: impossible. Sure, we have “lasers” in the real world, but in a practical sense, all they’ve been is tricky little optical games and, recently, some sort of pseudo-scientific surgical tool. Hardly the godlike power to incinerate your foe from miles away. 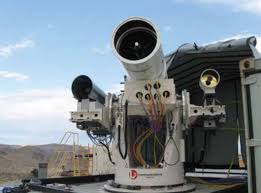 One of my students today showed me this article from CNN. It’s a goldfingered LASER BEAM mounted on a boat, and that sucker is, much like the Death Star, fully fargoing operational. It flings not a bolt of neon-colored plasma a la Star Wars or any of the multitude of video games I played as a kid, but rather an invisible bolt of lightning that incinerates its target at the speed of light. Seriously. Its targets simply burst into flame or straight-up evaporate under the onslaught of… what? Photons? Higgs-Bosons? Tiny leprechaun arsonists? It’s the kind of destructive force that would make somebody on the business end of the weapon feel as if god’s judgment had suddenly struck down from the heavens.

And the best part? It is controlled — and this is a quote from the article — by a “video-game-like controller.” Imagine it. All those hours I spent as a kid parked in front of the Nintendo could have been training me to fire a deathly real, honest-to-goodness, death-from-above laser beam. If I had only joined the Navy.

Of course, a weapon like this calls to mind all sorts of ethical arguments, and one only wonders where the technology will go from here. Sure, the gun is enormous now, mounted to the deck of a battleship and requiring its own hangar to house it, but in a decade? Twenty years? How far away is a literal real-life iteration of a Ghostbusters-esque proton pack that laces the enemy with a maelstrom of positronic energy that simply causes all of its molecular bonds to scatter like so many roaches when you turn on the light in the kitchen?

But for the time being, let’s just bask in the sheer amazing innovative drive of science. Don’t F with ‘Murica.