There’s a positive feedback loop with staggering implications building in our house.

The kids sense each other.  They pretend to ignore each other, but they’re keenly aware of each other.  Like two quantum-entangled photons carving a helix around one another as they rocket through the cosmos, each sprout picking up the psychic vibrations that the other gives off.

In a lot of ways it’s cool.  Big brother will watch little sister, mimicking her faces and giving her little coos and pokes and kisses.  It’s adorable, really.  He’ll even, properly motivated, allow her to sit in his lap on the couch and snuggle with her like a mother wolf coiling around her cub.  And she, of course, is entranced and enchanted with the idea of another human in the house who’s within a foot of her size.  She watches him with the steely eyes of a hawk tracking a mouse through tall grass from hundreds of feet up, flailing her marshmallow arms and kicking her lizard-skin feet like she’s riding a tiny invisible bike.  It’s enough entertainment to watch for hours, if only it would last that long. 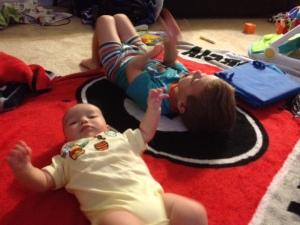 Phase 1 — distract the adults by looking adorable and harmless.

But it doesn’t.  Not even close.

No, they can feed off one another’s positive energy only so far until one of them will shed an electron, causing the happiness in the system to shift out of phase and become unstable.  From instability it’s only a matter of time — and not much time, at that — until the entire system collapses and one of them starts crying.  Usually, it’s the infant.  Her clementine-sized brain just isn’t capable of holding on to an emotion for longer than a few minutes, and when she doesn’t know what to feel, that’s when the tears come.

Now, big brother can deal with her crying.  He can deal with her screaming.  It doesn’t upset him in any appreciable way.  What he has a problem with is not being the loudest thing in the room.  She’s bawling in terror and apprehension because she suddenly realizes that she doesn’t actually have her mother in her line of vision, and he’s howling gleefully in answer because he’s two and a half and making noise with his mouth is one of his favorite things.

Before you ask, mom and dad are sitting exhausted on the couch, because we, too, can endure the noise to a point.  There’s a threshold of upset noise from the kids below which it simply isn’t energy-effective to respond.  We can’t be hauling ourselves up to see to the sprouts’ every need every two or three minutes, we’d be crazy people.  (Just look at our parents — we are each the oldest of 4.  How they ever managed having four children in the house at one time and not getting carted off to the asylum is a feat which astounds me more every day I pass with our two bundles of joy.)

The noise builds.  If left unchecked, the binary star system will collapse entirely; the infant’s screams becoming more plaintive and actually reaching out to rattle the flesh of our adult eardrums, the toddler, feeding on her unrest, beginning to scream in earnest, upset perhaps because he hasn’t been stopped yet or because he’s afraid that if he stops making noise the Silence will descend forever.  Seriously, I think the boy is terrified of quiet.  If he’s not shouting or babbling or singing as he stomps, runs and crashes around the house, he’s smashing toys/cups/tiny-things-he-should-never-have-gotten-ahold-of into other toys/other cups/tabletops/daddy’s head.  They get louder and louder, the binary stars spiraling faster and more violently around one another until we scoop them up and take them into opposite rooms, thus saving the universe from obliteration and our inner ears from violent decompression.

And they wake each other up.

Sprout #1’s bedtime routine is so finicky, he launched into a bloodcurdling tirade the other night when I tried to bring the wrong blanket into the room.  I wasn’t even going to cover him with it.  It was for ME, and he would not abide its presence in the room.  After his four bedtime stories and four bedtime songs, we leave and he goes into the five stages of grief, coming to rest about eleven minutes later, usually, passed out like a raggedy drunk clutching a Winnie the Pooh plush figurine in his tiny hand instead of a 40.  Meanwhile, Sprout #2 goes to sleep across the hall.  Her routine is simpler if no less demanding — she merely has to suck at the fountain called Mommy for anywhere from seventeen to forty-seven minutes before she goes into a milk coma.

The next ten minutes are critical.  The walls in our house were, let’s say, not designed with kids in mind.  There is no aural insulation.  Every sound carries and the floors upstairs creak like the rusty hinge on the barn in an old horror movie.  Step wrong exiting Sprout #2’s room and Sprout #1 will hear it and start his five stages all over again, adding another stage — blind, frantic screaming — at the beginning of the chain.  This screaming fit will wake Sprout #2 and then the whole cycle must begin again.  Alternatively, if, say, Daddy, after putting his pajamas on upon leaving Sprout #1’s room, finds that he’s for example left his phone upstairs and goes to retrieve it, Sprout #1 is about 80% likely to hear Daddy creeping past his room for up to an hour after bedtime and here come the five stages again, except now it’s more like seven stages and they all sound like I’ve told him Santa Claus is not real and popsicles are actually made of vegetables.

Then, there’s the early morning.  Sprout #2 wakes up anytime from 5AM to 6AM needing more Mommy Fountain, and apparently Sprout #1 sleeps like a secret agent being pursued by the intelligentsia of five different countries, because he wakes up and flies into action at the drop of a hat: banging on the door, howling to be let out, babbling in terror of the scary bugs.  Of course after more than a few hours of sleep there is no consoling him back into dreamland, so 5AM is just when he gets up these days, which means 5AM is just when I get up these days, because there is no sleep for anybody while Mom is with the infant and the toddler is screaming to wake the dead.

Is it any wonder that my wife and I have never felt more exhausted in our lives?  She’s a stay-at-home mom these days, and I work at the school then come home, and we get a scant hour to ourselves after the kids sack out to look at each other and wearily lament the loss of the days when we could, I don’t know, function like actual human beings in a world where said human beings are not held hostage to the whims of tiny despots.

But we love our kids.  Really, we do.  They are miraculous and wondrous and inspiring and incredible and they bring to our lives joy beyond words.

I am a teacher, runner, father, and husband. I am an author-in-progress. I know just enough about a lot of things to get me into a lot of trouble. END_OF_DOCUMENT_TOKEN_TO_BE_REPLACED
This entry was posted on Monday, September 8th, 2014 at 10:14 PM and tagged with funny, infants, kids are awesome, kids are black holes, kids make you insane, no sleep, parenting, toddlers, we used to be normal and posted in Kids. You can follow any responses to this entry through the RSS 2.0 feed.
« My Wife, the Overachiever
That Time I Gave My Son an Enema »