There is no satisfaction like the satisfaction you gain from taking on a task entirely foreign to you and mastering it.

Yesterday, found a leak under our sink. Today, it’s fixed. Not by a contractor, not by an expertly licensed and trained plumber with a truck full of tools and a belt that never quite seems to keep his pants up. By me.

So what if it took three hours and two trips to the Home Depot?

So what if my kitchen currently looks like a disaster area?

So what if I had to buy and learn to use two brand new tools that I may never use again?

So what if my face is going to be broken out for weeks from rubbing my mug against the underside of the sink?

So what if my back and shoulders may never be the same after cramming them into that tiny space?

I fixed a thing. And instead of the $300 it likely would have cost to call a “professional,” I’m out only $25, a few hours of work, and a small portion of my dignity (apparently the belt doesn’t hold my pants up on the job either). 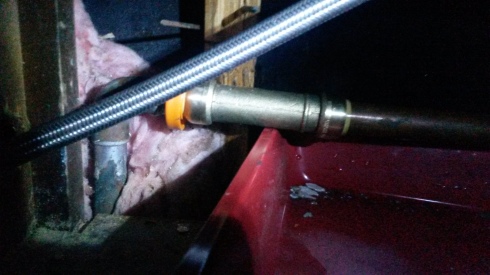 See that? That’s what a pipe looks like when it’s not leaking anymore. (Sidenote: I worked harder than I should have to get this picture, and it still looks like unmollified hell.)